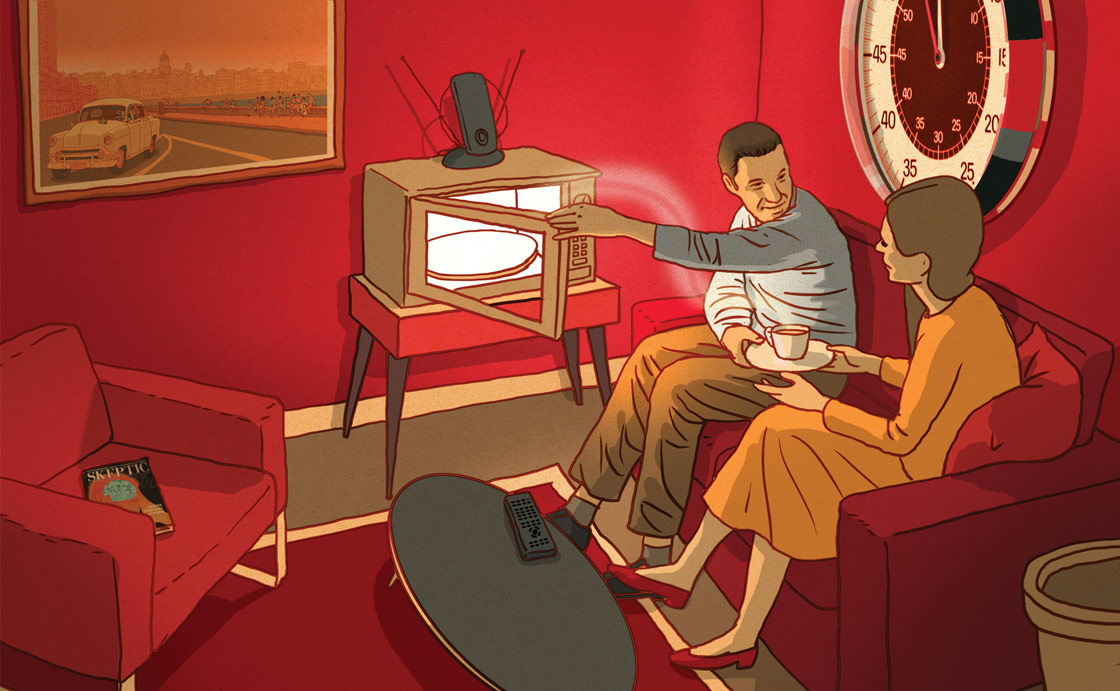 “Havana Syndrome” is the latest in a long list of health scares involving the fear of new technology. The present panic involves claims of a secret weapon that uses sound or microwaves to zap people anywhere in the world. Robert Bartholomew examines some of the sensational claims made in a recent 60 Minutes episode suggesting White House attacks amid ongoing political tensions with Russia.

This article is a followup to the one published in Skeptic magazine 26.4 (2021): “Havana Syndrome Hysteria and the Great Wild Goose Chase.”

ABOVE: Iillustration by Izhar Cohen.

“I will leave it to you as to whether the truth can exist with details omitted.” — Robin Hobb

On February 20, 2022, one of the most storied names in broadcast journalism — the CBS news magazine 60 Minutes, aired a segment on “Havana Syndrome” — a cluster of mysterious health complaints among U.S. and Canadian diplomats and their families in Cuba that have been attributed to a microwave weapon. First reported in Havana in late 2016, over 1,000 cases have since been recorded around the world. The episode was rife with dramatic claims including the suggestion that a nefarious foreign power is behind the “attacks” and may have breached White House security with the capacity to zap the President and his cabinet with an incapacitating energy beam. At least 20 children of diplomats were said to be possible victims, some on American soil.1

“Attacked” Near the White House

Former homeland security advisor Olivia Troye told 60 Minutes correspondent Scott Pelley that during the summer of 2019 she was descending a stairwell near the White House when she suddenly felt a piercing sensation on the right side of her head, vertigo, and nausea. She said it was as if “she had been physically struck” by an outside force that rendered her disoriented and struggling to stand. She compared it to a panic attack and wondered if she was having a stroke. She even worried it might be a brain tumor. About a year later she experienced another episode while walking to her car at the White House when she was overcome with dizziness and vertigo. “I felt like I couldn’t really walk. …I had a depth perception issue where I couldn’t figure out where the ground was. And I would start walking. And I felt like I was just gonna fall right into the ground.” Later she experienced a third episode. She never sought treatment or reported it to authorities at the time.

That alone should set off skeptical alarm bells. Just imagine — you are a national security advisor to the Vice President of the United States. One day you are walking near the White House and you believe you may have been hit with a mysterious energy beam that leaves you incapacitated and barely able to walk, and your response is to do nothing — you neither seek medical attention nor report it to your superiors. This reaction raises the possibility that the symptoms may have been unconsciously embellished over time. Her symptoms are neither unique nor extraordinary. There are a host of common conditions that could account for her symptoms which affect the vestibular system of the inner ear, which is responsible for hearing, balance and spatial awareness including depth perception. It is estimated that 35 percent of all adults over 40 will experience vestibular dysfunction, and Troye’s symptoms are among those most commonly reported.2 As medical students are taught: if you hear hoof steps, think horse, not zebra. There are many well-known medical conditions far more common than secret sonic weapons, which as far as we know do not exist.

Remembrance of Nuclear Things Past

Putin’s elevation of his nuclear arsenal to high alert forces us to recall what’s at stake in the Ukraine crisis. Listen/read for free: