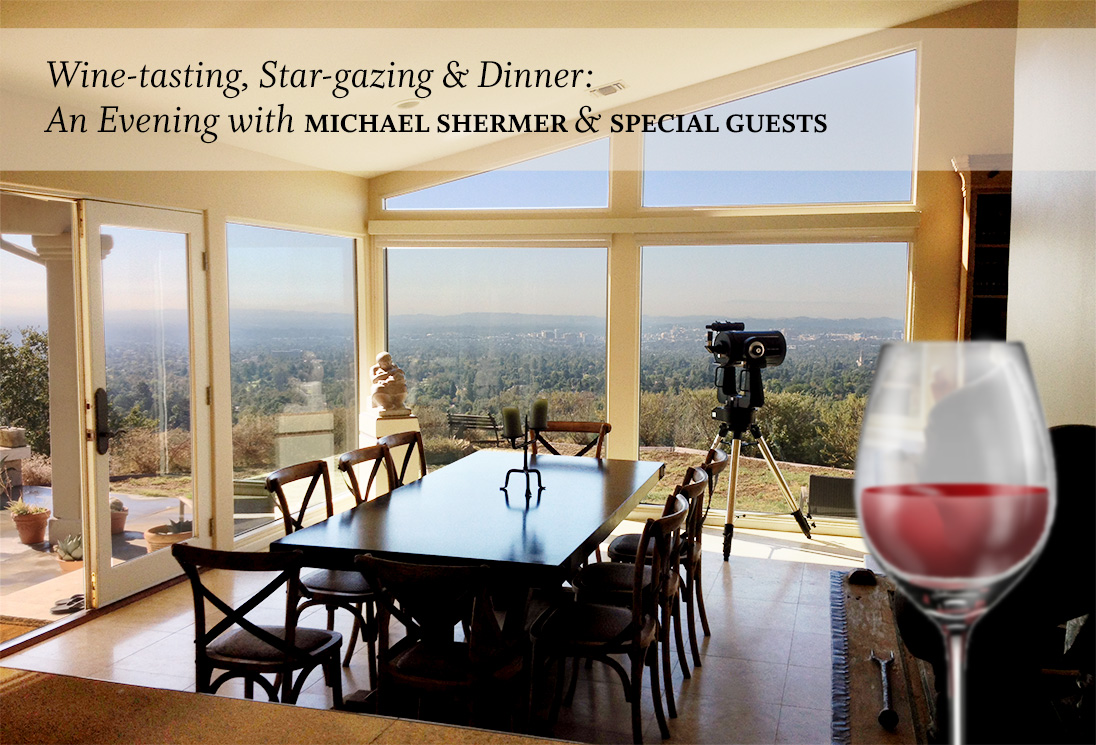 Join Michael Shermer, and Special Guests for a dinner evening, and wine tasting

For donations of $500 or more during our current fundraising drive, you are invited to join Michael & Jennifer Shermer in their cliff-side home when they host a fundraising dinner party and wine tasting event. We’ll have a spectacular sunset view of all of Southern California, and an 8-inch Meade telescope for some star-gazing that night. Dates to be determined. To get on the email list to be informed of upcoming dinners—often with special guests—call our office at 1-626-794-3119. 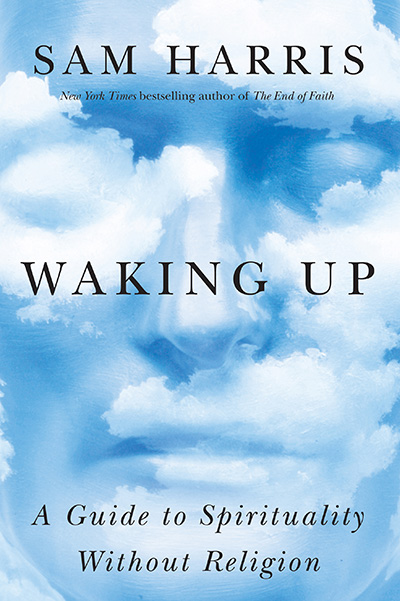 For donations of $100 or more to the Skeptics Society during our current fundraising drive, you will receive an autographed, Special Edition copy of Sam Harris’ new book Waking Up. 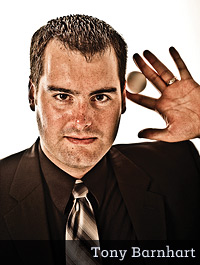 IN THIS DELIGHTFUL SHOW of mind and magic Dr. Tony Barnhart, a cognitive scientist and part-time professional magician (with over 20 years of performing experience), shows how magicians are informal cognitive scientists with their own hypotheses about the mind. His work on the science of magic has been featured in Science News for Kids as well as in national television shows, and he teaches a course on the Psychology of Magic at Northern Arizona University where he teaches students the principles of cognitive science through the art of magic. Don’t miss this entertaining and enlightening show and bring the kids!

This lecture includes a magic show!

Then, on December 7th
Alan Turing: The Enigma 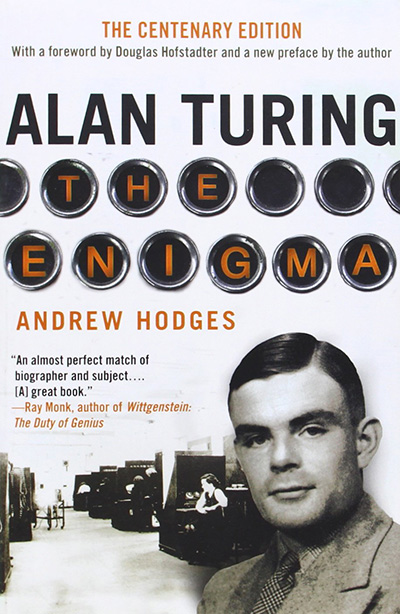 IT IS ONLY A SLIGHT EXAGGERATION to say that the British mathematician Alan Turing (1912–1954) saved the Allies from the Nazis, invented the computer and artificial intelligence, and anticipated gay liberation by decades—all before his suicide at age 41. In November a major motion picture starring Benedict Cumberbatch as Turing will be released, based on the classic biography by Dr. Andrew Hodges, who teaches mathematics at Wadham College, University of Oxford (he is also an active contributor to the mathematics of fundamental physics). Hodges tells how Turing’s revolutionary idea of 1936—the concept of a universal machine—laid the foundation for the modern computer and how Turing brought the idea to practical realization in 1945 with his electronic design. Hodges also tells how this work was directly related to Turing’s leading role in breaking the German Enigma ciphers during World War II, a scientific triumph that was critical to Allied victory in the Atlantic. At the same time, this is the tragic story of a man who, despite his wartime service, was eventually arrested, stripped of his security clearance, and forced to undergo a humiliating treatment program—all for trying to live honestly in a society that defined homosexuality as a crime.

Donald Prothero visits Berlin to attend the 74th Annual Meeting of the Society of Vertebrate Paleontology, and reflects on differences he perceives in social and political trends and scientific understanding between Germany and the United States.

Next Gen Dr Karl? Not Me

Mike McRae considers the ever-changing fashions of the public face of science presenters—fatherly and professional, wacky and fun, and so on—and reflects on the necessarily varied audiences such tropes seek to reach.

In Michael Shermer’s November 2014 “Skeptic” column for Scientific American, he considers democracies as perhaps the best way to create the type of perpetual peace toward which most sentient beings strive. 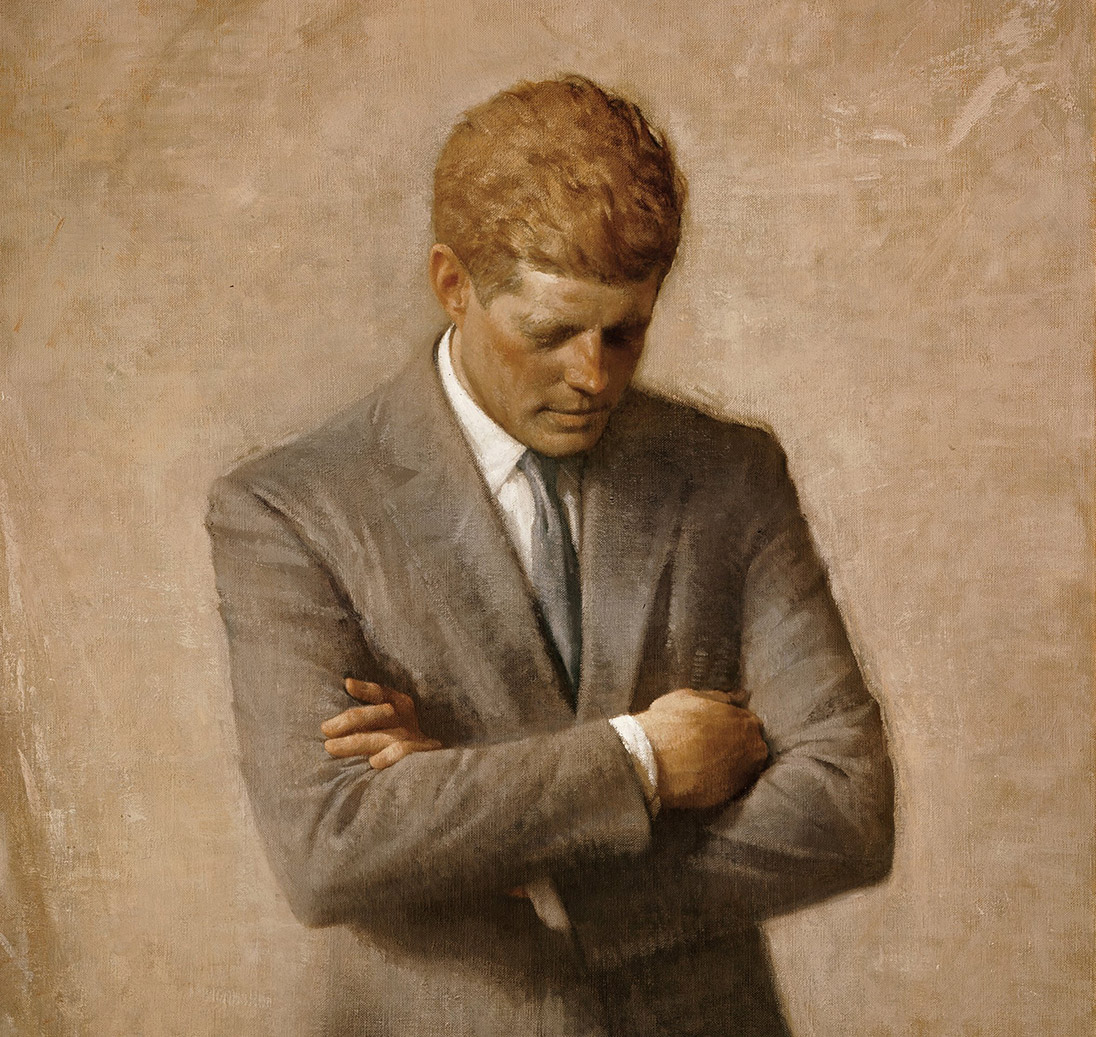 ABOVE: Detail of the official White House portrait of John F. Kennedy, by Aaron Shikler [Public domain], via Wikimedia Commons

On November 22, 1963, President John F. Kennedy was assassinated by lone-gunman Lee Harvey Oswald. Yet, about three-quarters of Americans believe that President Kennedy was the victim of a multi-shooter conspiracy. In this week’s eSkeptic, Michael Shermer discusses several psychological factors at work that allow conspiracy theories to persist.

Michael Shermer is the publisher of Skeptic magazine, a monthly columnist for Scientific American, and the author of the forthcoming book: The Moral Arc: How Science and Reason Lead Humanity toward Truth, Justice, and Freedom (January 20, 2015).

Half a century ago (plus one year) this Saturday, President John F. Kennedy was assassinated. Less than a year later the Warren Commission released its comprehensive 889-page report, concluding that Lee Harvey Oswald acted alone. Since then, exhaustive investigations, such as those by Gerald Posner (Case Closed, 2002) and especially Vincent Bugliosi (Reclaiming History, 2007) have backed up that original finding: Oswald acted alone.

Nevertheless, according to a 2009 CBS News poll, between 60 and 80 percent of Americans believe that President Kennedy was the victim of a conspiracy; that is, that there was more than one shooter in Dealy Plaza that day in November 1963. They are all wrong.

We’ve known the truth for 50 years, but many continue to deny the facts.

Consider just a few of the many facts that are not in the conspiracy believers’ favor: Oswald’s Carcano bolt-action rifle—with his fingerprints on it—was found on the sixth floor of the Texas School Book Depository building, where he was employed, in a sniper’s nest he built out of boxes that also had his fingerprints on them. Three bullet casings there match what 81% of eyewitnesses in Dealey Plaza reported hearing—three shots. (And tests with this rifle found that three shots are possible in the amount of time he had.) It was the same rifle Oswald purchased by mail order in March 1963. Co-workers saw him on the sixth floor of the Book Depository building shortly before JFK’s motorcade arrived, and saw him exit soon after the assassination. Oswald went home and picked up his pistol and left again, shortly after which he was stopped by Dallas Patrolman J.D. Tippet, whom Oswald shot dead with four bullets, all witnessed by numerous observers. He then fled the scene and ducked into a nearby theater without paying. The police were summoned and Oswald was confronted. He pulled out his revolver and attempted to shoot the first officer but the gun failed and he was arrested, saying, “Well, it is all over now.”

So why, 50 years later, do the conspiracies persist? There are several psychological factors at work:

COGNITIVE DISSONANCE. Big effects need big causes—we want balance between the size of the cause and the size of the effect. Example: The Holocaust is one of the worst crimes ever committed in history and its cause was the Nazi government, one of the most criminal regimes in history. There’s a balance. JFK was the most powerful political person on the planet, yet he was killed by a lone nut, a nobody living on the margins of a free society. There’s no balance. To reduce this dissonance and balance the scales, people have concocted countless co-conspirators (some 300 total) to stack on the “cause” side of the scale, including the KGB, Communists, radical right-wingers, the CIA, the FBI, the mafia, Castro, pro-Cuban nationalists, the Military Industrial Complex and even Vice-President Johnson (in a coup d’état). We saw a similar effect unfold when Princess Diana died. The cause of her death? Drunk driving, speeding, no seatbelt—but Princesses are not suppose to die of common causes. So, to dissipate the dissonance, conspiratorial cabals, everyone from the Royal family to the MI5 British intelligence agency, were conjectured to have been the real cause.

ANXIETY. Psychological research also shows that when people are placed in environments or conditions in which they feel anxiety and a loss of control, they are more likely to see illusory patterns in random noise and to look to conspiracies as explanations for ordinary events. Sociological research has also found that natural disasters such as hurricanes and earthquakes lead people to think that there are conspiratorial forces at work. The assassination of JFK was exceptionally disrupting and anxiety-producing, so it fits the bill.

RANDOMNESS. Another psychological factor at work is that the mind abhors randomness. We humans are terrible at understanding chance and probabilities. We find hidden patterns everywhere, even in purposefully random sequences and noise. And yet much of what goes on in life, in politics and in history at large is the product of chance and randomness. By this I do not mean to imply that JFK was killed by a random event, but that Oswald acting alone feels like a random factor when compared to a vast conspiratorial cabal plotting to overthrow the United States government.

Some conspiracy theories are real—Lincoln’s assassination, Watergate—so we should not dismiss them all out of hand without first examining the evidence. But once an unmistakable pattern unfolds before our eyes—as it has, for 50 years straight, in the case of JFK’s lone killer—it’s time to let the President RIP, for this conspiracy theory is DOA. QED.