NEW ON THE MORAL ARC BLOG
Why Islam? Of the three great monotheistic religions only one did not go through the Enlightenment 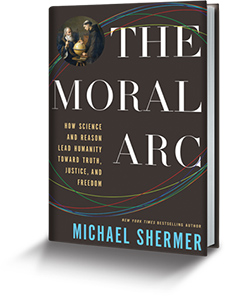 One of the central tenets of science is to define a problem to be studied with as much clarity as possible, and the key to clear communication is calling things what they really are. Unfortunately, both the American media and public intellectuals have failed to be honest in identifying what everyone in Europe knows is the primary source of terrorism in the world today: Islam.

Yes, there are political and economic motives behind terrorism in addition to religion, and most Muslims are not terrorists, particularly those living in Western countries. And of course Islam is not the only religion that can lead to violence, as witnessed in the occasional abortion clinic bombing by Christians, but I can’t even remember when the last one was. (I just checked: there were two in 2012, no injuries, three in 2007, also no injuries, a handful of inept attempts at arson in the early 2000s, with most serious attacks made in the 1980s and early 1990s.) Instead, most Christians who oppose abortion protest peacefully, as they did in front of the Supreme Court building in Washington DC that I happened upon on January 22, the 40th anniversary of Roe v. Wade, when I was in town on my book tour for The Moral Arc…

Donald Prothero considers the Christians Against Dinosaurs website, and reflects on the problem described by "Poe’s Law": it is often impossible to tell the difference between parody and sincere extremism.

Considering a Complaint About Skeptical Tactics

Daniel Loxton describes a recent recurrence of the very old controversy about skeptical use of undercover investigation and "sting " tactics.

The Truth About the Future of the Skeptic Movement

Daniel Loxton is the editor of Junior Skeptic, a periodical aimed at kids that's bound into every issue of Skeptic magazine. He's also an artist, a cryptid enthusiast, and a passionate advocate of the skeptic movement.