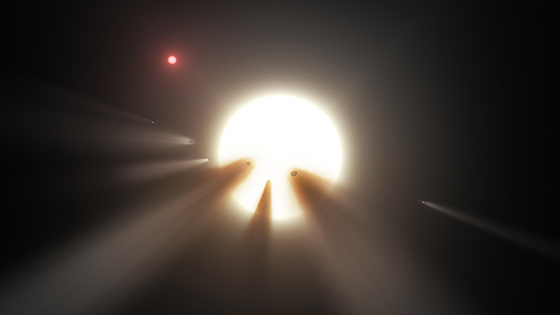 An artist’s concept depicts an orbiting swarm of dusty comet fragments as a possible explanation for the unusual light signal of KIC 8462852. (by NASA/JPL-Caltech [Public domain], via Wikimedia Commons)

It’s possible that life exists outside of our solar system and that we may, one day, find it. The Internet has been abuzz with speculation that an alien megastructure orbiting the star KIC 8462852 is responsible for the star’s erratic flicker. Since scientists have yet to advance a convincing natural explanation, attention has turned to more tantalizing possibilities. In this week’s eSkeptic, Dr. George Michael discusses a number of theories that have been advanced to explain the anomalous activity of the star.

The Great ET Paradox: Why We are Likely to Find Them Before They Find Us

Despite over 50 years of effort, the Search for Extraterrestrial Intelligence (SETI) enterprise has yet to detect any telltale signs of sentient life beyond Earth. But exciting news of an anomalous star 1,400 light-years from Earth has raised new hopes that we are not alone in the galaxy after all. Using data collected by the Kepler space telescope, astronomers discovered that the distant star—KIC 8462852—flickers in an unusual way, as if some unknown celestial bodies were intermittently obscuring it. Of the roughly 150,000 stars within view of the Kepler telescope, KIC 8462852 is the only one that glimmers in this odd fashion.1 Since it has been observed over the past few years, KIC 8462852 has dimmed dramatically, at times dropping in brightness as much as 22 percent.2 Moreover, the recorded dips have not been regular, but uneven and unpredictable. Tabetha Boyajian announced these amazing findings that she and members of Planet Hunters—a citizen science program launched at Yale University—in a paper recently published in the Monthly Notices of the Royal Astronomical Society.3

A number of theories have been advanced to explain the anomalous activity of the star. Conceivably, the dips in light could be occasioned by an orbiting a planet, but even a Jupiter-sized planet would only dim this type of star by only 1 percent as it transited across. Furthermore, the irregular flickering associated with the star would not be consistent with a planet making a regular orbit, which would produce predictable dimming. Perhaps fragments from a planetary collision could be responsible for the dimming light, but such events are so rare that we would not expect Kepler to pick up such activity based on probabilities.4 Finally, the star could be surrounded by an accretion disk of dust and rubble that has not yet agglomerated into planets or been gobbled up by the star itself. Such an explanation would be convincing if the star was young, but KIC 8462852 appears to be mature. As Jason Wright, a professor of astronomy at Penn State University, noted, the star is moving too fast to have formed recently, as it fails to show any infrared signs of a big disk that would normally be associated with the material that could cause such dips in brightness.5

Because scientists have yet to advance a convincing natural explanation, attention has turned to more tantalizing possibilities. By far the most exciting is that an alien megastructure is responsible for blocking the light emitted by the star.6 After news of the star’s unusual features was released, SETI scientists quickly began using the Allen Telescope Array in California to examine radio emissions from the area of star for any signs of artificiality.

Taking a Shot at the Boot Hill Ghost

Blake Smith presents a possible solution to a 1996 photograph of a purported phantom cowboy rising from the grave.