Michael Shermer on the Most Dangerous Pseudoscientific Beliefs that People Hold

NEW SCIENTIFIC AMERICAN COLUMN ON MICHAELSHERMER.COM
Afterlife for Atheists: Can a Brain’s Connectome be Preserved Forever?

The soul is the pattern of information that represents you—your thoughts, memories and personality—your self. There is no scientific evidence that something like soul stuff exists beyond the brain’s own hardwiring, so I was curious to visit the laboratories of 21st Century Medicine in Fontana, Calif., to see for myself an attempt to preserve a brain’s connectome—the comprehensive diagram of all neural synaptic connections. 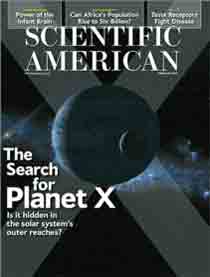 This medical research company specializes in the cryopreservation of human organs and tissues using cryoprotectants (antifreeze). In 2009, for example, the facility’s chief research scientist Gregory M. Fahy published a paper in the peer-reviewed journal Organogenesis, documenting how his team successfully transplanted a rewarmed rabbit kidney after it had been cryoprotected and frozen to -135 degrees Celsius through the process of vitrification, “in which the liquids in a living system are converted into the glassy state at low temperatures.”

Can brains be so preserved? Fahy and his colleague Robert L. McIntyre are now developing techniques that they hope will win the Brain Preservation Technology Prize, the brainchild of neuroscientist Kenneth Hayworth (I’m on their advisory board as the advocatus diaboli). As I write this, the prize is currently valued at more than $106,000; the first 25 percent of the award will be for the complete preservation of the synaptic structure of a whole mouse brain, and the other 75 percent will go to the first team “to successfully preserve a whole large animal brain in a manner that could also be adopted for humans in a hospital or hospice setting immediately upon clinical death.” […]

In this week’s eSkeptic, Harriet Hall, M.D. (a.k.a. The SkepDoc) takes a close look at Samir Chachoua, a man who claims to have discovered a cure for HIV/AIDS, cancer, and a host of other illnesses.

Be sure to check out Harriet Hall’s free, ten part, video lecture series, entitled Science Based Medicine. More details below.

On January 29, 2016, HBO Real Time host Bill Maher featured Samir Chachoua, a man who claims to have discovered a cure for HIV/AIDS, cancer, and a host of other illnesses. He is not licensed to practice medicine in the US; he operates out of Mexico where he charges rich visitors many thousands of dollars for treatment with his untested vaccines. Most of what he says on the program is unverifiable, demonstrably false, or frankly impossible.

Charlie Sheen: Failure, not a Success

The problem from the start is that Chachoua claims to have cured Charlie Sheen of HIV, and yet he admits that Charlie still has HIV. What gives? He says Charlie was dying from severe encephalitis, was incontinent, couldn’t tolerate daylight, and had severe liver failure. He claims to have “fixed” the liver, eliminated all the symptoms, and returned Charlie to vibrant health within a few hours of the first treatment. He claims that “within minutes” of starting his therapy, Charlie’s liver tests went to normal levels. That is simply not a believable claim, and no proof is on the offing. Damaged tissue takes time to heal. Recovery from chronic illness takes more than a matter of hours.

Charlie Sheen was also featured on a recent episode of Dr. Oz. There he described how Chachoua injected himself with Charlie’s blood. Bizarrely, he drew blood from some kind of lump on Charlie’s elbow rather than from a vein. Dr. Oz was appalled, as anyone would be. Not only was there a risk of HIV transmission, but there was a risk of transfusion reaction from mismatched blood that had not been typed and cross-matched. If the incident really occurred, it was nothing but a theatrical stunt demonstrating Chachoua’s overconfidence and poor judgment.

Sheen had been on antiretroviral medications that had reduced his viral load to undetectable levels. As with all such patients, this does not mean the virus had been eradicated from the entire body. When Sheen stopped taking the meds, the HIV titers (concentrations) remained undetectable for a while, but then started going back up, exactly as would be expected. Chachoua started treating him during the undetectable period and proclaimed Charlie cured. But then Charlie’s titers started rising again. He realized he was not cured and went right back on his antiretroviral medications on the plane home from Mexico.

The James Randi Educational Foundation has produced a superb 10-part video lecture series in which Harriet Hall, M.D., contrasts science-based medicine with so-called “complementary and alternative” methods. The topics include: What is CAM?; acupuncture; chiropractic; energy medicine; homeopathy; miscellaneous “alternatives”; naturopathy and herbal medicines; pitfalls in research; science based medicine vs. evidence-based medicine; science-based medicine in the media and politics. The lectures range from 32 to 45 minutes. A companion course guide is also available. Listen to the audio advertisement for the course.

Mr. Deity and The Apologist

In this episode, Mr. Deity tells Lucy how excited he is about one of Allah’s new apologists.