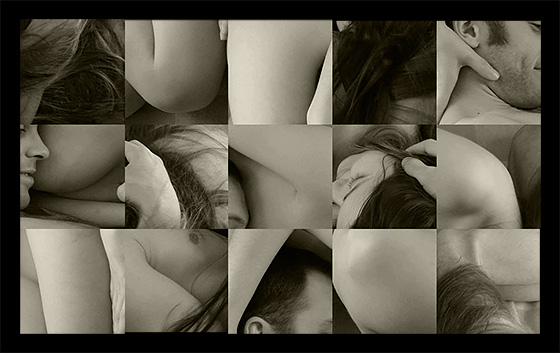 What would happen if you stopped watching online pornography for a few months? In this week’s eSkeptic, the debate about pornography addiction and its effects concludes with this response to Marty Klein by Philip Zimbardo, Gary Wilson, and Nikita Coulombe.

ABOUT THE IMAGE ABOVE: Collaged version of Love in Wiesbaden by Jacob Appelbaum from San Francisco, USA [CC BY-SA 2.0].

Marty Klein wrote a reaction to our original post on how porn is shaping young men’s sexual response. Klein suggested that science doesn’t empirically support our assertion of unprecedented rates of sexual dysfunctions in young men. In fact, all studies assessing young male sexuality since 2010 report historic levels of sexual dysfunctions and startling rates of low libido. Erectile dysfunction (ED) rates range from 27 to 33 percent, while rates for low libido (hypo-sexuality) range from 16 to 37 percent. The lower ranges are taken from studies involving teens and men 25 years old and under, while the higher ranges are from studies involving men 40 years old and under.

All addiction is one condition, and “sexual behavior addiction“ not only exists but involves the same fundamental mechanisms and brain changes as substance addiction.

Recently a number of people have asked me about a newly published book entitled The Faith of Christopher Hitchens by the Christian apologist Larry Alex Taunton, who runs the Fixed Point Foundation and whom I have gotten to know through public debates and private conversations. The Religious News Service (RNS), for example, interviewed me about the book, explaining that they had never heard of the author and were wondering why I blurbed the book (a “blurb” is a short quote on the back jacket of books encouraging people to read it). Here is what I wrote (only the final sentence made it onto the book’s cover but the entire quote is on the book’s webpage):

If you really want to get to know someone intimately, go on a multi-day cross-country road trip, share fine food and expensive spirits, and have open and honest conversations about the most important issues in life. And then engage them in public debate before thousands of people on those very topics. In this engrossing narrative about his friendship with the atheist activist Christopher Hitchens, the evangelical Christian Larry Taunton shows us a side of the man very few of us knew. Apparent contradictions dissolve before Taunton’s penetrating insight into the psychology of man fiercely loyal to his friends and passionately devoted to leading a life of integrity. This book should be read by every atheist and theist passionate about the truth, and by anyone who really wants to understand Hitch, one of the greatest minds and literary geniuses of our time.

I thought the statement was a fair appraisal of the book, but now I am having second thoughts because of the reception the book has received in which many people seem to think that its author implies that Hitch had a death-bed conversion, or that he had serious doubts about his atheism, or that he was earnestly considering Christianity as a viable belief system. You can hear that theme reiterated in many of Taunton’s public interviews, especially by the hosts, and in the comments given to the RNS reporter, Kimberly Winston, by Hitch’s close friend of 30 years, Steve Wasserman, who “called the book’s claims ‘petty’ and ‘appalling’ when they were read to him,” adding: “I am not in the position to dispute what Taunton says were private conversations … but I really think it is a shabby business. It reveals a lack of respect. This is not a way to debate Christopher Hitchens’ beliefs—to report unverifiable conversations, which amazingly contradict everything Christopher Hitchens ever said or stood for.” […]