If by fiat I had to identify the most consequential ideas in the history of science, good and bad, in the top 10 would be the 1798 treatise An Essay on the Principle of Population by English political economist Thomas Robert Malthus. On the positive side of the ledger, it inspired Charles Darwin and Alfred Russel Wallace to work out the mechanics of natural selection based on Malthus’s observation that populations tend to increase geometrically (2, 4, 8, 16…), whereas food reserves grow arithmetically (2, 3, 4, 5…), leading to competition for scarce resources and differential reproductive success, the driver of evolution. 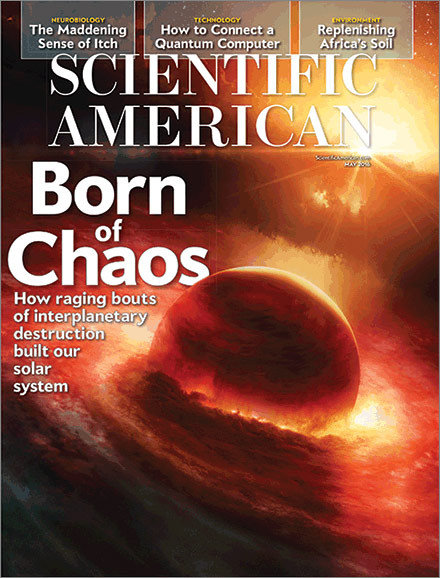 On the negative side of the ledger are the policies derived from the belief in the inevitability of a Malthusian collapse. “The power of population is so superior to the power of the earth to produce subsistence for man, that premature death must in some shape or other visit the human race,” Malthus gloomily predicted. His scenario influenced policy makers to embrace social Darwinism and eugenics, resulting in draconian measures to restrict particular populations’ family size, including forced sterilizations.

In his book The Evolution of Everything (Harper, 2015), evolutionary biologist and journalist Matt Ridley sums up the policy succinctly: “Better to be cruel to be kind.” The belief that “those in power knew best what was good for the vulnerable and weak” led directly to legal actions based on questionable Malthusian science. For example, the English Poor Law implemented by Queen Elizabeth I in 1601 to provide food to the poor was severely curtailed by the Poor Law Amendment Act of 1834, based on Malthusian reasoning that helping the poor only encourages them to have more children and thereby exacerbate poverty. The British government had a similar Malthusian attitude during the Irish potato famine of the 1840s, Ridley notes, reasoning that famine, in the words of Assistant Secretary to the Treasury Charles Trevelyan, was an “effective mechanism for reducing surplus population.” A few decades later Francis Galton advocated marriage between the fittest individuals (“What nature does blindly, slowly, and ruthlessly man may do providently, quickly and kindly”), followed by a number of prominent socialists such as Sidney and Beatrice Webb, George Bernard Shaw, Havelock Ellis and H. G. Wells, who openly championed eugenics as a tool of social engineering. […]

Have you learned most of your UFO stories from The History Channel and motion pictures? Chances are these glossy presentations of aliens and mysterious craft have hidden from you some of the shocking and silly history of this fascinating field. Join us as we interview UFO researcher Robert Sheaffer about Bad UFOs. 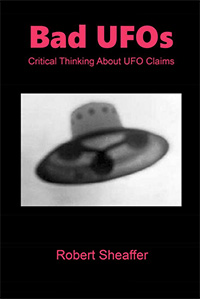 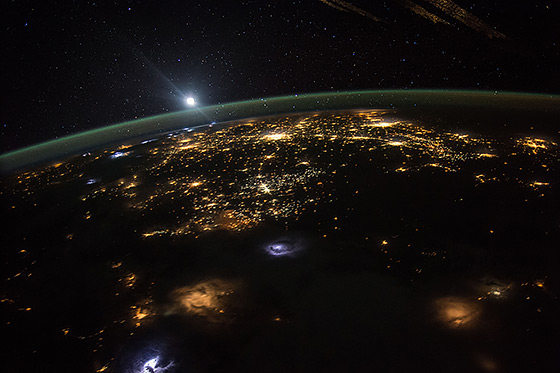 How significant are we as humans within the universe? Could the universe have been fine-tuned for our existence? In this week’s eSkeptic, Jérémie Harris and Edouard Harris examine the nature and extent of universal fine-tuning. This article appeared in Skeptic magazine 20.3 (2015). Read bios of Jérémie Harris and Edouard Harris at the end of the article.

ABOUT THE IMAGE ABOVE: NASA astronaut Scott Kelly took this photograph of a sunrise over the western United States and posted it to social media on Aug. 10, 2015. Kelly wrote, “#GoodMorning to those in the western #USA. Looks like there’s a lot going on down there. #YearInSpace” The space station and its crew orbit Earth from an altitude of 220 miles, traveling at a speed of approximately 17,500 miles per hour. Because the station completes each trip around the globe in about 92 minutes, the crew experiences 16 sunrises and sunsets each day.

by Jérémie Harris and Edouard Harris

Theists commonly argue that we live on a cosmological knife-edge. Numerous physical constants are said to be so vital to our existence that even the slightest change in any one of them would have produced an eternally lifeless, barren cosmos. If the gravitational constant, for example, had been scaled up or down by only a miniscule factor, or the electromagnetic or cosmological constants perturbed in the slightest, life as we know it could never have come into being.1 Theologians and religious apologists contend that the probability of the universal constants taking on the exact values needed to sustain life is so low that they could only have been tuned just so by an intelligent agent, who, presumably, must also have called the universe itself into existence.2 This, in a nutshell, is the essence of the cosmological fine-tuning argument. Yet, when closely considered, the notion of a universe fine-tuned for humanity leaves theists with more questions than answers.

How Do You Quantify Fine-Tuning?

One of the biggest problems with the fine-tuning argument is that the extent of fine-tuning is, at least presently, utterly impossible to measure. In order to estimate the probability that a given universe could sustain life, one needs at least two pieces of information: first, the number of possible universe configurations; and second, the number of such configurations that are conducive to the development of life, however one may define it.3 Since neither of these quantities is known, no discussion of fine-tuning can begin without a frank acknowledgement that the key premise of the fine-tuning argument is entirely speculative.

Nevertheless, frequent attempts have been made to present the fine-tuning argument in quantitative terms. These attempts have produced a wide range of dubious, and largely inconsistent, results. Often, their underlying assumptions are characterized by shocking failures of the imagination; some, for example, rely upon the conjecture that only carbon- based life is possible; others investigate the effect of changing just one cosmological parameter at a time, while keeping all others fixed, and thereby deny themselves almost the entire space of possible parameter values.4