Why is it so hard to say “I made a mistake”—and really believe it? Social psychologist Dr. Carol Tavris, one of the most influential thinkers and writers of our time, explores in dialogue with Michael Shermer cognitive dissonance and what happens when we make mistakes, cling to outdated attitudes, or mistreat other people—we must calm the cognitive dissonance that jars our feelings of self-worth. And so, unconsciously, we create fictions that absolve us of responsibility, restoring our belief that we are smart, moral, and right—a belief that often keeps us on a course that is dumb, immoral, and wrong. Backed by years of research, Mistakes Were Made (But Not by Me) offers a fascinating explanation of self-justification—how it works, the damage it can cause, and how we can overcome it. The updated edition of the book features new examples and concludes with an extended discussion of how we can live with dissonance, learn from it, and perhaps, eventually, forgive ourselves.

Order Mistakes Were Made (But Not by Me) from Amazon. Why do we catch colds? What causes seasons to change? And if you fire a bullet from a gun and drop one from your hand, which bullet hits the ground first? In a pinch we almost always get these questions wrong. Worse, we regularly misconstrue fundamental qualities of the world around us. In Scienceblind, cognitive and developmental psychologist Dr. Andrew Shtulman, a professor of psychology and cognitive science at Occidental College, where he directs the Thinking Lab, shows that the root of our misconceptions lies in the theories about the world we develop as children. They’re not only wrong, they close our minds to ideas inconsistent with them, making us unable to learn science later in life.

So how do we get the world right? We must dismantle our intuitive theories and rebuild our knowledge from its foundations. The reward won’t just be a truer picture of the world, but clearer solutions to many controversies—around vaccines, climate change, or evolution—that plague our politics today.

Order Scienceblind: Why Our Intuitive Theories About the World Are So Often Wrong from Amazon.

In this remote Science Salon, Michael Shermer talks with Derren Brown, a British magician and writer.

His TV show Derren Brown: Mind Control received immediate success after airing in 2000. His specials include Russian Roulette, Seance, The Heist, Hero at 30,000 Feet, How to Predict the Lottery, and Apocalypse. His live shows Something Wicked This Way Comes and Svengali have won him two Olivier Awards. He garnered the 2012 BAFTA for Best Entertainment for Derren Brown: The Experiments. He has also penned the books Tricks of the Mind and Confessions of a Conjuror, which have sold over 700,000 copies worldwide.

His latest book is Happy: Why More or Less Everything is Absolutely Fine. Derren is currently in the US for his off-Broadway show Secret (April 21st – June 25th, 2017), which has already sold out and has been extended with additional dates. 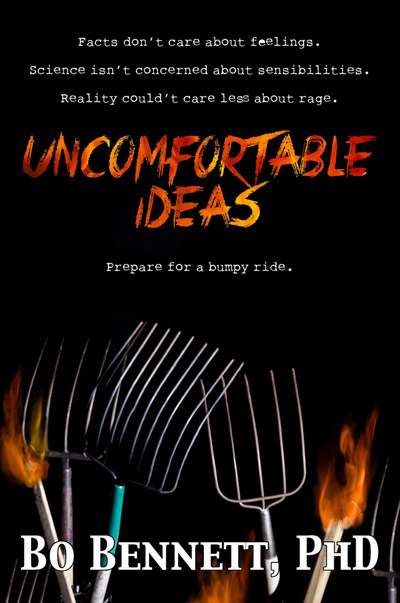 In this week’s Skepticality, Derek and returning guest, Dr. Bo Bennett, discuss his latest book, Uncomfortable Ideas. The book covers many of the hot button topics from which even the most rational of us tend to shy away or not think about critically. As Bennett says in the book, “Facts don’t care about feelings. Science isn’t concerned about sensibilities. And reality couldn’t care less about rage.” Find out why it’s important to push through discomfort and engage even the hardest issues with rational thought.