WATCH THE LIVE STREAM THIS SUNDAY!

Dr. Andrew Shtulman—Scienceblind: Why Our Intuitive Theories About the World Are So Often Wrong (Science Salon # 11) 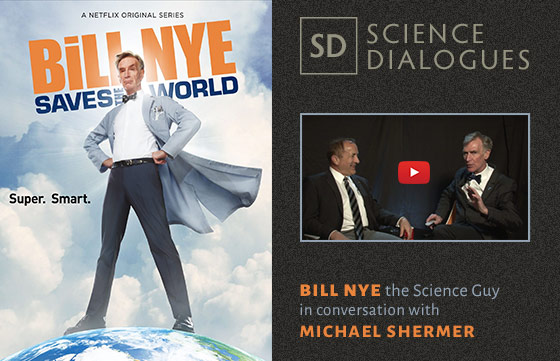 This interview with Bill Nye the Science Guy is the first in Skeptic’s new series of Science Dialogues, hosted by Skeptic magazine Publisher and Skeptics Society Executive Director Michael Shermer. The impetus for the conversation is Nye’s new Netflix series “Bill Nye Saves the World,” which airs Friday, April 21, 2017. The conversation took place on December 18, 2016 at the offices of the Planetary Society, for which Nye is the CEO. It was filmed by Skeptic’s videographer Brad Davies. 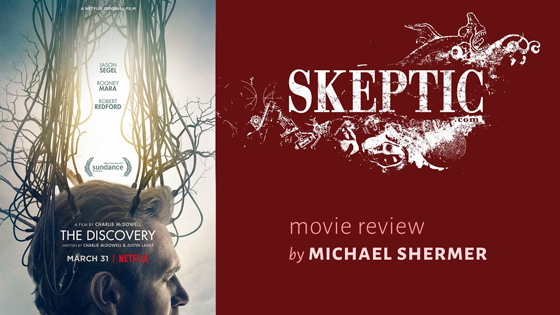 Has science proved the afterlife?

The new Netflix movie, The Discovery (by Charlie McDowell) is a sci-fi tale about a scientist who discovers “proof” of the afterlife. In a review of the movie, Michael Shermer explores the problems facing concepts like the afterlife and mind uploading. 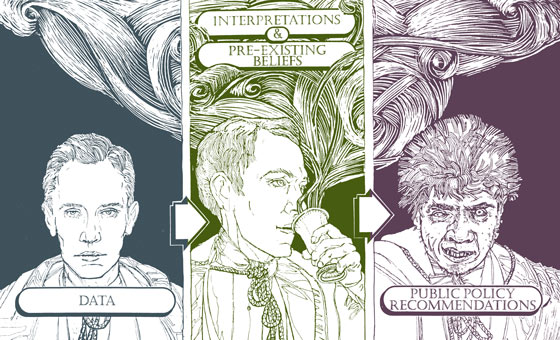 In 1995, Skeptic magazine published one of our most controversial issues in our 25 year history, one dedicated to analyzing the claims of a book by Charles Murray and Richard Herrnstein titled The Bell Curve: Intelligence and Class Structure in American Life. It merits revisiting because of recent events in which Charles Murray has been booed off stage at two academic institutions in March and April of 2017: one at Middlebury College and the other at Villanova University. One of the startling facts to emerge from these recent protests is that both students and professors who were protesting admitted that they had never read any of Murray’s books but that the very idea that there could be group differences in intelligence was anathema and not open for discussion. They didn’t even want to hear Murray’s arguments, much less try to refute them.

This is not our style or philosophy at Skeptic magazine. Here there are no sacred cows, no ideas too hot to touch. It is our belief that truth will win out in the bright light of open discussion, debate, and disputation. Of the many articles in that issue (which you can order online), we reproduce in the next two eSkeptics: one critical of The Bell Curve and the other in defense of the book and its thesis. We have enough respect for our readers that you are smart and wise enough to judge for yourself and without the need for someone else to tell you how to think about a subject.

We begin, today, with the cognitive psychologist Diane Halpern’s critique titled “The Skewed Logic of the Bell-Shaped Curve” (below). Dr. Halpern is one of the world’s leading scientists in the study of cognitive differences, including both race and gender, and she herself has encountered controversy for just daring to study the subject.

In eSkeptic for April 26, 2017, we will republish the late U.C. Berkeley anthropologist Vince Sarich’s article, “In Defense of The Bell Curve: The Reality of Race and the Importance of Human Differences.” Sarich was also a very controversial scientist for his research on race and group differences, from which he never backed down.

The Skewed Logic of the Bell-Shaped Curve

As I read The Bell Curve by Richard J. Herrnstein and Charles Murray I was reminded of a cartoon from the popular children’s television show Sesame Street. As regular viewers of Sesame Street already know, every episode is brought to you courtesy of a number and letter. On those days when the star of the show is the letter “I,” we are shown a group of hard-working cartoon characters whose job it is to polish a giant letter “I” until it glistens like an expensive jewel in the sunlight. In fact, this small army of letter polishers spend their entire day polishing the letter “I” because it is such an Important and Interesting letter. In a similar manner, Herrnstein and Murray also polish their “I”—Intelligence—and its related measure, IQ, which assume the spotlight as the best predictors of socioeconomic class and a diverse range of variables that cover the rest of the alphabet from Abusive relationships to Xenophobia and Zealotry. 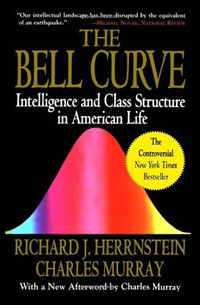 Commenting on The Bell Curve is a lot like trying to catch a ball of jello. The arguments are slick and, like most skilled rhetoricians who are attempting to change how people think, the authors provide a veneer of fairness to cover the flaws and biases in their message. In this case, the veneer is thin—so thin that it allows their hypocrisy and social agenda to peek through. In making their points, the authors present, discredit, and then dismiss all opposing points of view. Contradictory evidence is criticized as statistically or methodologically flawed. Unfortunately, the stringent criteria that they apply to counterarguments are abandoned when they present the evidence in support of their favored conclusions. The authors shape their arguments like skilled word smiths. A factual statement like “some educational programs have not worked” is gradually morphed into a misleading statement like “educational programs have not worked,” and then, “educational programs cannot work,” a subtle change in wording that occurs as the authors stray from their data.

Can anyone seriously believe that Murray was shocked and dismayed when he found that he had upset many people with his pronouncements of racial inequality or the way he used IQ data to support an ultra-conservative political agenda? The authors have created the perfect medium for a growing media frenzy with a very long book in which much of the supporting evidence is relegated to a statistical appendix and extreme claims are succinctly summarized. The voracious appetite of the media is whetted by controversies, sound bites, and simple explanations of complex subjects. Even lengthy and thoughtful articles are condensed into a few words for newspaper headlines that are supposed to pique the reader’s interest. This is the stuff that sells newspapers, keeps people tuned to the chatty banter that passes as television news, and sustains conversations in countless barber shops, bus stops, and kitchen tables. Despite Murray’s protestations to the contrary, this is a book about race, and race is one topic in which we are all self-proclaimed experts. Each of us has an opinion about racial similarities and differences and a story to tell that shows how right our own opinions are. Cognitive psychologists who study stereotypes and prejudice have known for a long time that strongly held beliefs are difficult to change, and that people cling to their beliefs even when confronted with evidence that shows that these beliefs are wrong. We are more likely to change our interpretations of experience and our memory for events so that they fit our existing belief system than we are to abandon our beliefs. Perhaps books like this one should be sold with warning labels in which readers are urged to be alert for misleading statements, missing evidence, and biased interpretations—sort of a surgeon general’s warning. The messages in The Bell Curve are at least as dangerous as cigarettes and alcohol. […]