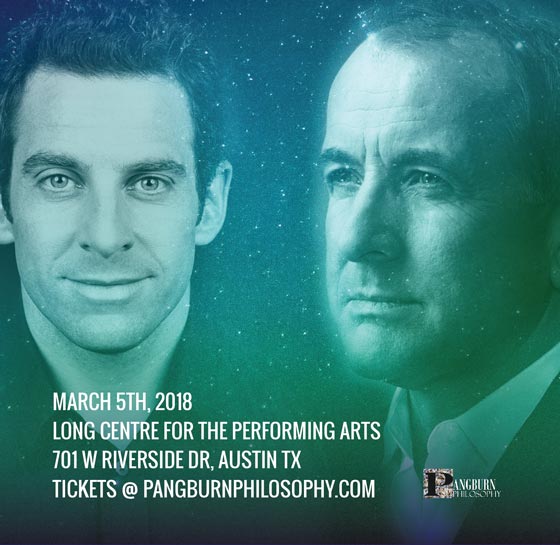 Join authors Sam Harris & Michael Shermer for a night of skepticism, science & reason. Sam Harris is the author of five New York Times bestsellers. His books include The End of Faith, Letter to a Christian Nation, The Moral Landscape, Free Will, Lying, Waking Up, and Islam and the Future of Tolerance (with Maajid Nawaz). Dr. Michael Shermer is the Founding Publisher of Skeptic magazine, a monthly columnist for Scientific American, and a Presidential Fellow at Chapman University where he teaches Skepticism 101. He is the author of New York Times bestsellers Why People Believe Weird Things and The Believing Brain, Why Darwin Matters, The Science of Good and Evil, and The Moral Arc. His next book is Heavens on Earth: The Scientific Search for the Afterlife, Immortality & Utopia.

How Seth Andrews, the Thinking Atheist, Became a Card-Carrying Skeptic

Seth Andrews is the host of The Thinking Atheist podcast which “reminds atheist and believer alike to engage the brain, to challenge even the most sacred of traditions/beliefs, to be passionately curious about our world and universe, and to never be satisfied with the charge, ‘You just have to take it on faith.’” UFOs. Aliens. Crop circles. Giant figures scratched in the desert surface along the coast of Peru. The amazing alignment of the pyramids. Strange lines of clouds in the sky. The paranormal is alive and well in the American cultural landscape. In Science Salon # 15, Michael Shermer interviews Dr. Donald R. Prothero and Timothy Callahan about their new book, UFOs, Chemtrails, and Aliens, exploring why such demonstrably false beliefs thrive despite decades of education and scientific debunking. Also, listed to Blake Smith interview Prothero and Callahan in episode 144 of MonsterTalk: The Science Show About Monsters.

Dr. Robert Trivers and Dr. Michael Shermer have a lively conversation on everything from evolutionary theory and human nature to how to win a knife fight and Trivers’ membership in the Black Panthers. Don’t miss this engaging exchange with one of the most interesting scientists of the past half century.

This Science Salon followed Dr. Robert Trivers’ lecture on ‘The Evolutionary Genetics of Honor Killings,’ which he gave in Dr. Michael Shermer’s Skepticism 101 course at Chapman University on Thursday November 16, 2017. Watch the lecture.

Learn more about Science Salon and stay informed about upcoming salons by subscribing to eSkeptic: our free, weekly email. 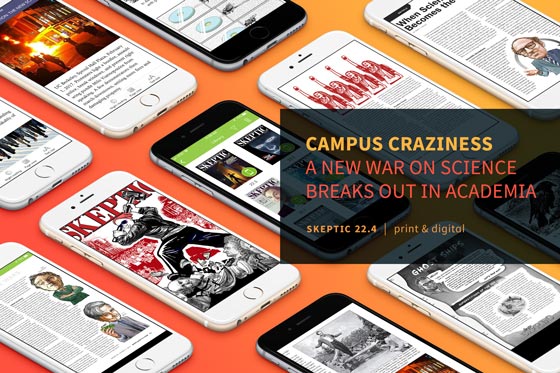 Here’s what’s in the latest issue of Skeptic magazine (22.4): When Science Becomes the Enemy • No Barriers to Inquiry • When Secularism Becomes a Religion: The Alt-Left, the Alt-Right, and Moral Righteousness • Radically Wrong in Berkeley • I Am Not a Racist, and So Are You: An Unauthorized Peek at the Great Shaming Taking Place at an Institution of Higher Learning Near You • From Camelot to Conspiracy: Memory, Myth, and the Death of JFK • The SkepDoc: Diet Sodas • Junior Skeptic on Ghost Ships, and more…