In this short AMA Michael Shermer answers a single question: “What is your opinion of Jordan Peterson?”

Dr. Shermer is asked this question in nearly every public appearance he makes, along with regular emails and social media queries he receives. At a November 2018 public event with Richard Dawkins, in the Q&A, he and Shermer received no less than four questions about Jordan Peterson, even though Jordan was not the topic of the dialogue between Dawkins and Shermer. Watch that edited clip reel from that dialogue.

Clearly there is much interest in Jordan Peterson and the phenomenon surrounding him, so Dr. Shermer thought he would issue his opinion in the form of an essay he penned for Skeptic magazine 23.3: “Have Archetype — Will Travel: The Jordan Peterson Phenomenon”. Purchase back issue 23.3 online.

In Science Salon AMA # 3, Dr. Shermer offers a brief summary of his current opinion of Peterson and then reads his essay: “Have Archetype — Will Travel: The Jordan Peterson Phenomenon”.

Watch previous episodes of AMA and email a question to us and we’ll try to get it into the next AMA. 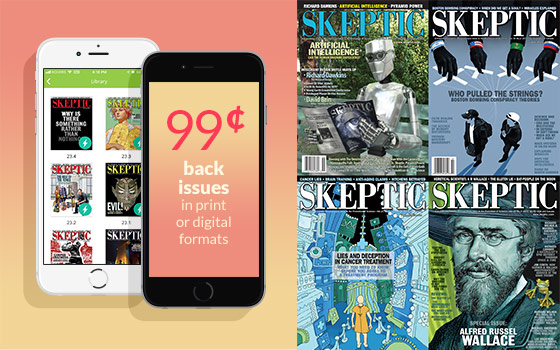 99¢ back issues (in print or digital format)

Sale runs from Jan 25, 2019 at 2am PT to Jan 28, 2019 at 10pm PT while supplies last. For back issues in print format, shipping will be calculated based on weight & destination and added to your total at checkout. Back issues that are no longer available in print may be available in digital format (except for a couple of our earliest volumes, which will hopefully be digitized next year.)