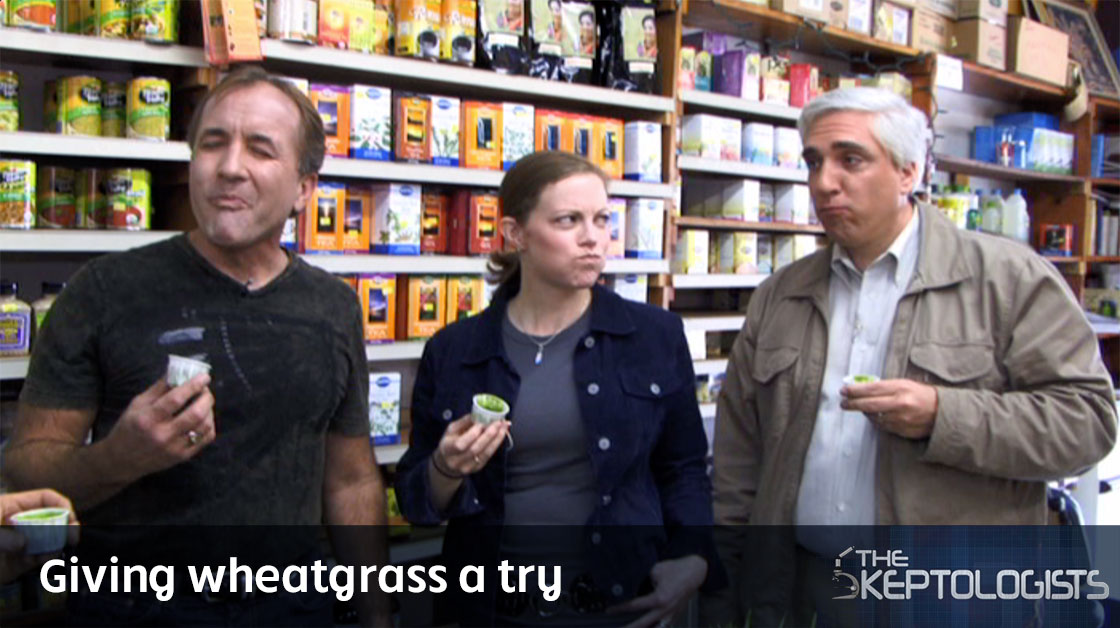 Shermer, Sanford, and Novella express their delight in imbibing wheatgrass juice, claimed to be a “super food.”

Pilot episode of The Skeptologists: Wheatgrass

It was a series we hoped to sell to a television network where “many are called but few are chosen,” and ours wasn’t. In this episode on wheatgrass (from April 2008), we filmed at the Mt. Wilson Observatory, the Skeptics Society offices in Altadena, and primarily at a nearby vegetarian health food store called O Happy Days Café, where Shermer, Sanford, and Novella tried wheatgrass juice, with amusing results. 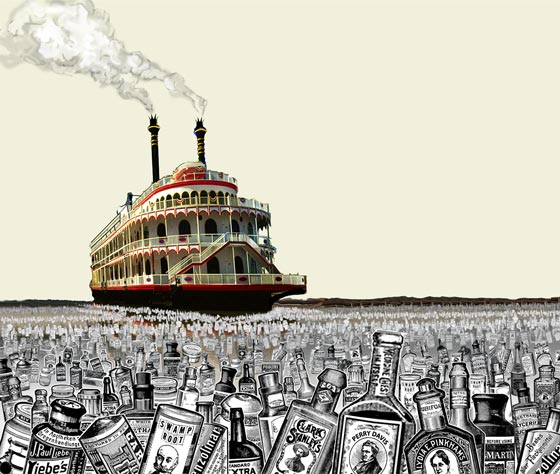 In this column from Skeptic magazine 26.2 (2021), Harriet Hall, M.D. recounts that Mark Twain was an enthusiastic proponent of “alternative medicine” long before the term was coined — and much of it remains the same as in his time.

What do you know about Mark Twain? That he was a famous humorist? That he wrote Tom Sawyer and Huckleberry Finn? Maybe you know he questioned many conventions like organized religion. What you may not know is that he was an enthusiastic proponent of “alternative medicine” long before the term was coined.

Mark Twain, the pen name of Samuel Clemens, was born in 1835, long before germ theory, antibiotics, randomized clinical trials, or modern vaccines. The medicine of his day was pre-scientific and unregulated, splintered into sects with allopaths, homeopaths, hydrotherapists, osteopaths, and others battling each other for primacy. Anyone could practice medicine without a license. Twain had no rational basis for choosing one sect over another.

Twain always feared death, with good reason. In his day, life was very uncertain, with 25 percent of children dying before their first birthday, and 50 percent by age 21. Twain was a premature, sickly child. As an adult, he asked his mother if she had been afraid he wouldn’t live; he claims she said no, she was afraid he would! He saw four of his siblings die. Frequent epidemics of smallpox, cholera, and scarlet fever tore through the population; mortality was high due to poor nutrition and poor public sanitation.

As a child, Twain was so afraid of measles that he decided to put an end to the fear by catching measles; he deliberately exposed himself to a patient. He found that having measles was nowhere near as bad as the fear had been. He learned there was something worse than death: worrying about it.

Twain was raised with alternative medicine. His mother, Jane Clemens, dabbled in everything from homeopathy to spiritualism to patent medicines. As a boy, Twain saw a faith healer cure his mother’s toothache with suggestion. His mother frequently dosed him with Perry Davis’ “Pain Killer” — a mixture of alcohol, camphor, and cayenne pepper. All treatments apparently worked: he survived.

As an adult, Twain experimented with everything, sampling every system of medical treatment. He thought there was no reliable way to find out why people got sick or the best way to make them well. Back then, there wasn’t; but today we do have a reliable way: science. Twain thought that if enough treatments were sampled, there might be a remote chance of finding one that actually worked. […]