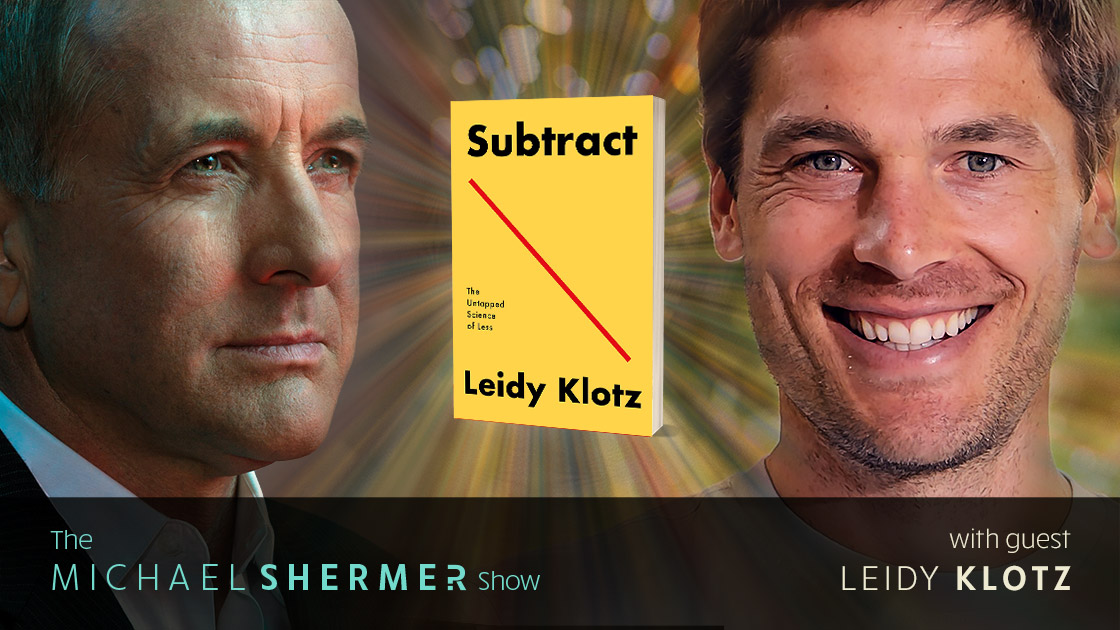 Leidy Klotz on doing more with less, based on his book Subtract: The Untapped Science of Less

We pile on “to-dos” but don’t consider “stop-doings.” We create incentives for good behavior, but don’t get rid of obstacles to it. We collect new-and-improved ideas, but don’t prune the outdated ones. Every day, across challenges big and small, we neglect a basic way to make things better: we don’t subtract. Leidy Klotz’s pioneering research shows why. Whether we’re building Lego® models or cities, grilled-cheese sandwiches or strategic plans, our minds tend to add before taking away. Even when we do think of it, subtraction can be harder to pull off because an array of biological, cultural, and economic forces push us towards more. But we have a choice — our blind spot need not go on taking its toll on our cities, our institutions, and our minds. By diagnosing our neglect of subtraction, we can treat it. 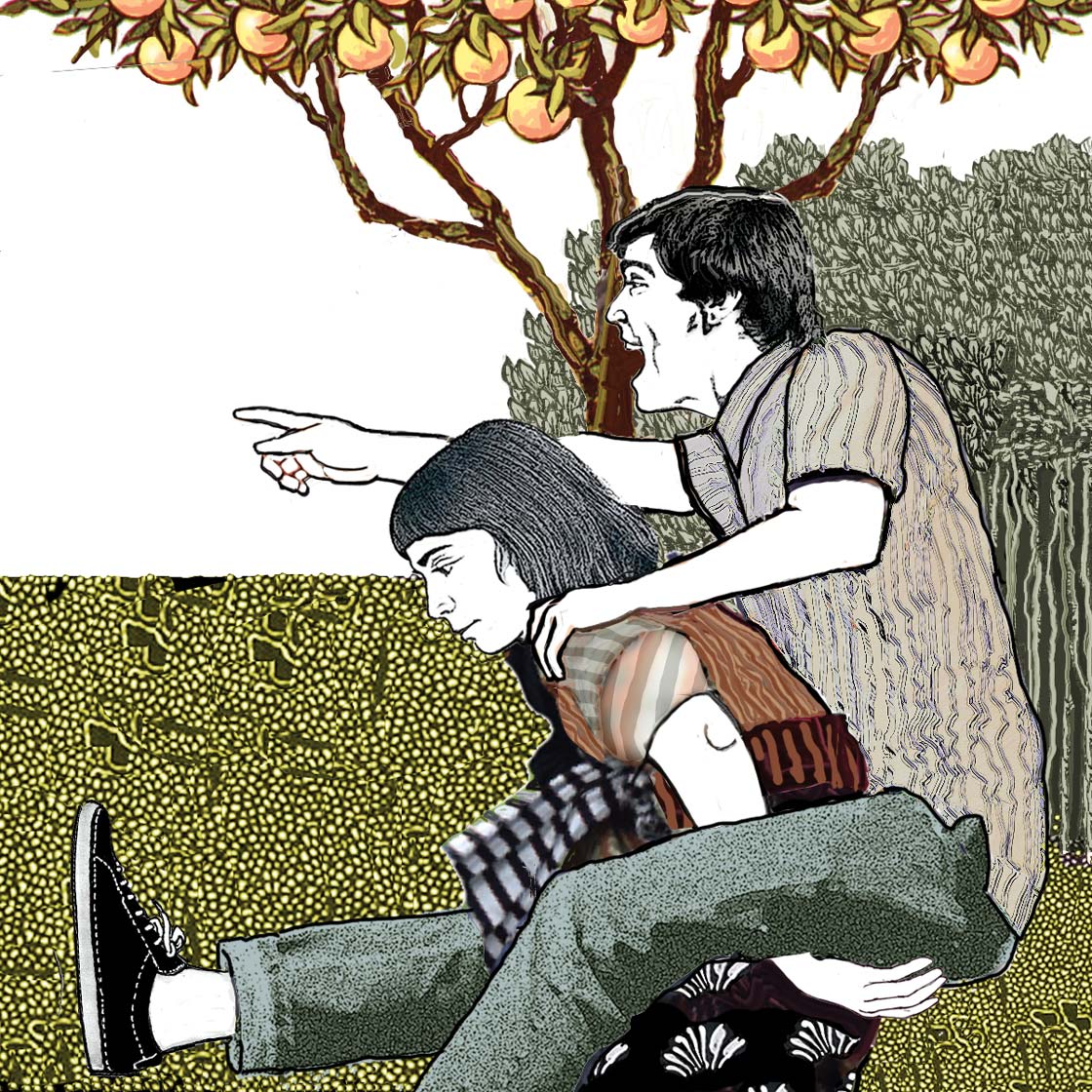 Do you believe that men have greater power and privilege because they are stronger, more aggressive, and smarter than women (and don’t have babies)? Think again. This article appeared in Skeptic magazine 26.3 (2021).

Inequality: Why Women?
A Plausible Sociocultural Explanation for the Persistence and Universality of Gender Inequality Over Thousands of Years

In 2020 Netflix aired the four-part mini-series Unorthodox, loosely based on Deborah Feldman’s memoir of the same title, depicting the flight of a young Satmar Hasidic Jewish woman from her arranged marriage in the insular and oppressive ultra-orthodox community in Brooklyn where she had grown up, to a life of freedom — albeit alienated from her family and that social world — in Berlin, previously the epicenter of the Holocaust.

As we watched the series, we were reminded of similar gripping memoirs of women escaping from extreme forms of other religions. Ayaan Hirsi Ali’s Infidel (followed by Nomad and Heretic) described her escape from a Somali version of Islam — which included her suffering genital mutilation — to avoid an arranged marriage and find freedom and education in the Netherlands. Amber Scorah’s book Leaving the Witness chronicles her exit from her family’s three generations of devotion to the Jehovah’s Witness religion that left her in Shanghai with no education or support system, and what it was like starting her life over that eventually led her to pursue education and a new life in New York City. And Tara Westover’s memoir Educated described her exodus from a school avoiding survivalist Mormon family in rural Idaho. She endured physical dangers, physical abuse, and coercive psychological control in a determined effort to achieve an education, even though it would challenge her most deeply held and unquestioned beliefs; and she ultimately received a Ph.D. in history from the University of Cambridge.

We began to wonder whether these memoirs constituted a new literary genre or subgenre. Despite the differences of language, culture, geography, and religion, the stories were basically the same. A woman grows up in an insular religious community, where formal education is denied to women (reminiscent of the way American enslaved people had not been allowed to learn to read and write), where contact with the larger world is minimized, where she has a status greatly inferior to that of men, and where her predetermined life path consists of subservience to religious and other community norms, and to the roles of childbearing, infant care, childrearing, and homemaking.

Were these works actually part of a pattern? Was this primarily a phenomenon of women, or of religious extremism, or was it part of something larger — of inequality in general? And if so, where does gender inequality fit in? These are the questions that prompted this article and that it aims at exploring.

Of course, it isn’t only in extremist forms of religion that people in the category of women find themselves in inferior positions to those in the category of men. While not discounting the possibility of rare exceptions, it is fair to say that gender inequality characterizes religions in general, in differing ways and to differing degrees. Religions (and secular ideologies with the same function) are important because they serve as the justification societies use for the social order they impose, including the conferral of power and privilege. However, religions are not the only place where women as a category of humans find themselves in an inferior position to the category of men. 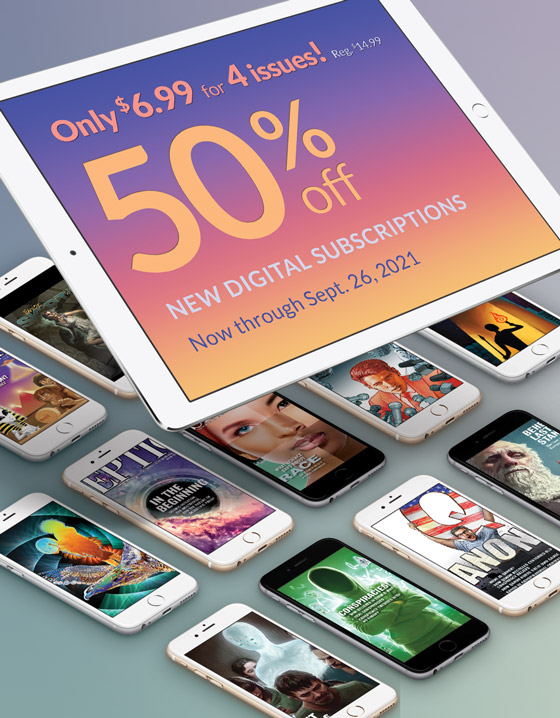 This is the best sale we have ever had on digital subscriptions: 4 digital issues for only $6.99. Don’t miss this amazing opportunity to get annual digital subscription for half price* at pocketmags.com. New digital subscribers can download the current issue (26.3: UFOs & UAPs) instantly, and then automatically receive issues 26.4 (in December 2021), 27.1 (in March 2022), and 27.2 (in June 2022).

Sale end September 26, 2021 only at PocketMags.com. Your digital subscription can be synchronized to your favourite Apple or Android device(s), or read on your PC or Mac. *After your first year, your subscription will automatically renew at the full standard annual price, unless cancelled.