SKEPTIC PRESENTS
What is a Skeptic?

In this video — the fourth in our series of videos that promote science and critical thinking through the use of humor, wit, and satire — we present a fun and informative look at the principles of Skepticism.

CREDITS: Special thanks to David Cowan, Daniel Mendez, and Jim Robinson for their support in launching this new series of Skeptic videos.

If you missed our first three videos, check them out:

If you would like to show your support for these videos, please make a tax-deductible donation to the Skeptics Society. With your support, we hope to produce these instructional, educational, and entertaining videos regularly throughout the year for free viewing and use by everyone everywhere to spread the message of the power of science and skepticism to make the world a saner, safer place.

Make a tax-deductible donation
to the Skeptics Society

NEW FROM DANIEL LOXTON ON SKEPTICBLOG.ORG
Ghosts, Knowing, and a Lesson at Bedtime

Daniel Loxton and his young son discuss the topic of ghosts.

Breaking Down a Criticism of
Abominable Science!

Daniel Loxton digs down into a critique of Abominable Science offered by a Loch Ness monster proponent. 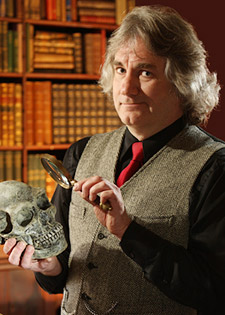 His Tory of the Jersey Devil

Dr. Brian Regal previously joined us on MonsterTalk to discuss the demise of the Werewolf at the hands of Charles Darwin, and the history of Cryptozoology and the relationship of credentialed scientists and amateur enthusiasts.

Get the MonsterTalk App

In this week’s eSkeptic, we present James Randi’s ’Twas Brillig… column from Skeptic magazine 18.2 (2013) in which he discusses the detection of deception using the infamous polygraph “lie detector.”

A Skeptic in Court, Part II

To those of us who first come upon it, the classic gypsy bazhure swindle is so simple, obvious, and avoidable, that we can’t imagine how victims are so easily taken in by it. Consider this very common advertisement:

Okay, that’s obvious woo-woo, we’d all agree, but look a bit further. Some of these victims had had Tarot card readings with Monica (the psychic described in my previous column in Skeptic magazine 18.1) and as a result agreed to have her cleanse their money. All of them had set up a final meeting that Sunday night, at which they expected they would retrieve their cleansed money and would of course pay a gratuity for that service—whatever they felt was appropriate—to Señora Monica. But, to their genuine surprise, Señora Monica never showed up!

What I’ve described to you is—as I wrote previously—a typical example of the classic gypsy bazhure (pronounced “bah-zhoor,” as in “azure”) in which the “mark” is lured in by such minor gimmicks as Tarot readings, which is a bit of fun for a few bucks, perhaps followed by a “gift” of herbs or charms. Then the victim is offered the suggestion that maybe some of the money in the bank might be contaminated by a curse—unknown to the victim, of course—and that “cleansing” that currency would be advisable. The cost would be a percentage decided upon by the victims—excuse me—patrons. The fact that the original “cursed” currency had long ago vanished into the banking system, and might by then be in the pockets of gangsters, or could have been incinerated and replaced, or buried, seemingly doesn’t occur to the patrons.

But enough on how gullible these families were. Now let’s try to understand this from the proper point of view. They may have been naïve, but were not necessarily stupid. I say “to their genuine surprise,” because they were governed by their strong ethnic convictions, ideas conveyed to them from infancy by those they loved and trusted, who nurtured and raised them to accept and believe that magic was a part of the real world, and that certain “gifted” persons could manipulate those forces. 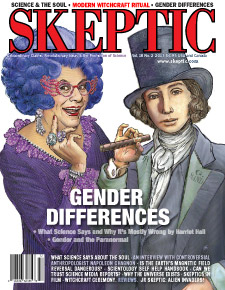 Order this back issue

Here is a typical example: In August of 2009, police in Lakewood, WA, were searching for a woman who had promised to “cleanse” the money of at least seven Hispanic families in the area, but stole it instead. Well, consider: a sizeable portion of our population regularly receives a wafer-and-wine combination, while on their knees, from a man wearing a dress, and they actually believe that the bit of food they’ve consumed has been magically transformed into flesh and blood. I’ll go no further on that, but it is a firm, unshakeable conviction of those on their knees, regardless of the alibis and rationalizations that have been offered to explain their delusion. A far less numerous crowd believes that spirits and fairies inhabit trees and rocks, another portion accepts that mankind was deposited on Earth—and into volcanoes! —by intergalactic warlords, and some are convinced that taking zero concentrations of medications is better than taking the actual medicine. Some folks—not I—have no problem with these latter fantasies, but cannot fathom why an un-named woman would have been able to make off with the life savings of these families….

I have consistently declined to participate in any court case or investigation where I would be required to accept evidence obtained with the polygraph. However, if I were to be called upon to deny that this silly device is effective or dependable, I’d have no hesitation in doing so. The evidence is just so much against this technology, it’s difficult to believe just how long it has existed as a supposedly valid notion. Let’s look at some of the history of so-called “lie detection.”

The device itself is a nightmare of tubes, wires, electrodes, and moving styluses, something right out of a Loony Tunes production. By measuring and displaying changes in respiration, heart rate, blood pressure, skin conductivity, and other variables of the human body, a complex series of graph-lines are generated, and a technician is supposedly able to decide whether the answers to a set of questions are honestly given, or not. We need not get into more involved aspects of the procedure such as who comes up with the questions to be asked—though that is a matter of primary importance, of course. Let’s examine opinions of the “pros” who should know.

On his Pentagon letterhead as Assistant Secretary of Defense for Command, Control, Communications, and Intelligence, this November 5, 2002, memorandum was sent by John P. Stenbit to the directors and administrators of all major military offices of the Department of Defense:

SUBJECT: Continued Use of Polygraph Techniques
I have recently reviewed the report of the National Research Council on the existing scientific evidence on the validity of the polygraph technique. While the report contained many findings that may ultimately lead to improved methods for the detection of deception, I think it is important to emphasize that the National Research Council found that none of the potential new technologies for the detection of deception showed any promise of supplanting the polygraph technique for screening purposes in the near term.

I believe this could have included Tarot cards and Ouija boards, as well, and made just as much sense. Note that it doesn’t say that the polygraph works, at all! The truth is that it’s a useless hitech assemblage that has consistently failed double-blind tests of its efficacy. The way this paragraph was composed, there is a strong suggestion that the flummery actually has performed as claimed. This next paragraph is even worse, further implying that the polygraph works:

As the Department continues to research alternative technologies in this critical area, I believe it is important to remember that the National Research Council Report determined that the polygraph technique is the best tool currently available to detect deception.

Next, Secretary Stenbit labeled the polygraph an “important tool”—twice! —when it’s useless, according to research done at the National Academy of Sciences—see below. This is simply a blatant denial of fact to bolster an erroneous opinion!

In the coming months, our country will face many unique challenges to our national security. The polygraph technique remains an important tool to detect deception in selected national security and law enforcement matters. Where appropriate and authorized, I recommend that we continue to use the polygraph technique as an important tool in our total decision-making process.

Late in 2002, the U.S. National Research Council—a branch of the National Academy of Sciences—issued their official report on the use of the polygraph. As we’ve seen, Mr. Stenbit chose to completely ignore this report’s key finding that the use of polygraph screening was found to be unjustified— and thus even dangerous—to national security. Nor did the NRC/NAS report characterize polygraphy as “the best tool currently available to detect deception,” as Mr. Stenbit erroneously asserted. The report merely noted that

…some potential alternatives to the polygraph show promise, but none has yet been shown to outperform the polygraph.

Since the polygraph works about as well as the Oracle at Delphi—another shaky premise, though much older—this is not at all supportive. Regarding polygraph technology in general, the NRC/NAS stated that

…there is essentially no evidence on the incremental validity of polygraph testing, that is, its ability to add predictive value to that which can be achieved by other methods.

Let’s examine the realities, folks. A CBS News account of the suicide bombing at a CIA base in Afghanistan stated, regarding the careless acceptance of a spy on the base:

The double agent was brought onto the base without first being given a polygraph test, one of the basic tools in establishing a spy’s trustworthiness.

Wrong. The polygraph does not work. The history of this farce is long and involved, with uninformed “experts” raving about success, and law enforcement agencies smugly accepting results as if they were valid. In addition to the Afghanistan case above, some very strong examples of this error stand out: Use of the polygraph did not expose the fact that Larry Wu-Tai Chin, a Chinese language translator working for the CIA in a critical capacity, was selling crucial information to China. Robert Hanssen of the FBI went similarly undetected despite the regular periodic “screening” of FBI employees using polygraphs. Aldrich Ames, a highranking CIA analyst, routinely passed polygraph exams, though for years he was a master Soviet spy who passed information to his real employers. The blatant fact is that not a single spy has ever been caught by a polygraph screening exam. In 2003, the National Academy of Science issued a report titled, “The Polygraph and Lie Detection,” that found the majority of polygraph research to be, in their words, “unreliable, unscientific, and biased.” They also found the high rate of false positives obtained with the device, to be unacceptable.

No, folks, the polygraph is a highly undependable device, made even more dangerous because of the incompetence of the small army of “experts” who are able to find just about any conclusion required. Such is the power of belief.