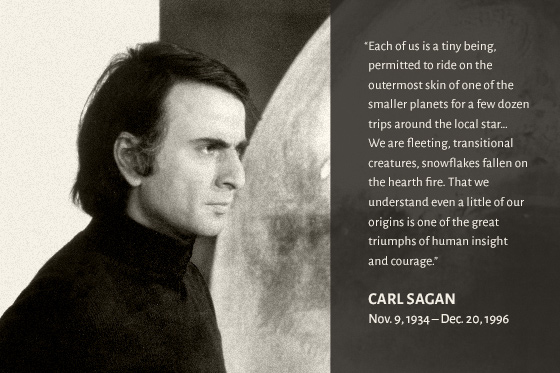 20 years ago today, the world lost a great human being. Carl Sagan was an American astronomer, cosmologist, astrophysicist, astrobiologist, science popularizer, scientific skeptic, professor, Pulitzer Prize-winning author, Peabody Award-winning TV celebrity and a visionary humanitarian, dedicated to improving science literacy around the world. He received the NASA Distinguished Public Service Medal, helped plan the first messages from Earth sent into space, and advocated for the Search for Extraterrestrial Intelligence (SETI). His 1980’s public television series, Cosmos, reached hundreds of millions of people world-wide. He was a true advocate for science, scientific skepticism, and critical thinking. Carl Sagan died of pneumonia at the age of 62, on December 20, 1996, after having suffered from cancer and undergoing several bone marrow transplants.

We remember him fondly, on this day, grateful for the inspiration and education that he provided to so many.

We Humans Are Capable of Greatness

In the following contemplative montage, Carl Sagan reads from his book, Pale Blue Dot: A Vision of the Human Future in Space.

We were hunters and foragers. The frontier was everywhere. We were bounded only by the earth and the ocean and the sky. The open road still softly calls…
—“The Frontier is Everywhere”

Carl Sagan: We Humans Are Capable of Greatness from WesTCoastiNTwo on YouTube.

The Story of Carl Sagan

The following is lovely, charming short film about a young boy, amazed by the stars in the night sky, who sets off on a voyage of great discovery. It is inspired by the life and work of Carl Sagan, one of the most famous scientists and science communicators of the 20th century.

As soon as I was old enough, my parents gave me my first library card. I think the library was on 85th Street, an alien land. Immediately, I asked the librarian for something on stars. She returned with a picture book displaying portraits of men and women with names like Clark Gable and Jean Harlow. I complained, and for some reason then obscure to me, she smiled and found another book—the right kind of book. I opened it breathlessly and read until I found it. The book said something astonishing, a very big thought. It said that the stars were suns, only very far away. The Sun was a star, but close up. —“The Backbone of Night,” Cosmos

Star Stuff: The Story of Carl Sagan from Ratimir Rakuljic on Vimeo.

A Vision of the Human Future in Space

Set to the words of Carl Sagan, Pale Blue Dot is an animation that situates human history against the tapestry of the cosmos. Using a eclectic combination of art styles woven seamlessly together through music and visuals, the animation seeks to remind us that regardless of our differences, we are one species living together on the planet we call Earth.

THE MEASURE OF A LIFE

Carl Sagan and the Science of Biography

In the following article from Skeptic magazine 7.4 (1999), Michael Shermer ponders the question of what the measure of a life is once it has gone. And if that life was an epochal-shaping life, how is a contemporary biographer to put that life in perspective before the epoch is over?

WHAT IS THE MEASURE OF A LIFE WHEN IT IS GONE? A newspaper obit? A magazine story? A potted television biography? How shall we capture the essence of that life? A list of accomplishments? Highlights and lowlights? Interviews with family, friends, colleagues, and critics? A womb-to-tomb narrative? And if that life was an epochal-shaping life, how is a contemporary biographer to put that life in perspective before the epoch is over?

What tools should we use? Oral history interviews? Demographic and statistical data? Document analysis? What fields should we consult? Psychology? Sociology? Cultural history? Does the measure of a life depend as much on who is doing the measuring as it does on the measured life itself? Can we even get to the true core of a person? Can there be a science of biography? […]

IN THE IMMORTAL WORDS OF CARL SAGAN…
Edited by Michael Shermer

On a Plea for Tolerance

We have held the peculiar notion that a person or society that is a little different from us, whoever we are, is somehow strange or bizarre, to be distrusted or loathed. Think of the negative connotations of words like alien or outlandish. And yet the monuments and cultures of each of our civilizations merely represent different ways of being human. An extraterrestrial visitor, looking at the differences among human beings and their societies, would find those differences trivial compared to the similarities. The Cosmos may be densely populated with intelligent beings. But the Darwinian lesson is clear: There will be no humans elsewhere. Only here. Only on this small planet. We are a rare as well as an endangered species. Every one of us is, in the cosmic perspective, precious. If a human disagrees with you, let him live. In a hundred billion galaxies, you will not find another.
—“Who Speaks for Earth?,” Cosmos 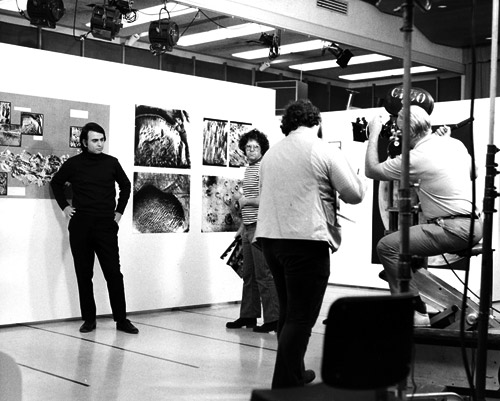 Those who raise questions about the God hypothesis and the soul hypothesis are by no means all atheists. An atheist is someone who is certain that God does not exist, someone who has compelling evidence against the existence of God. I know of no such compelling evidence. Because God can be relegated to remote times and places and to ultimate causes, we would have to know a great deal more about the universe than we do now to be sure that no such God exists. To be certain of the existence of God and to be certain of the nonexistence of God seem to me to be the confident extremes in a subject so riddled with doubt and uncertainty as to inspire very little confidence indeed. A wide range of intermediate positions seems admissible, and considering the enormous emotional energies with which the subject is invested, a questioning, courageous and open mind seems to be the essential tool for narrowing the range of our collective ignorance on the subject of the existence of God. —“The Amniotic Universe,” Broca’s Brain

I worry that, especially as the Millennium edges nearer, pseudoscience and superstition will seem year by year more tempting, the siren song of unreason more sonorous and attractive. Where have we heard it before? Whenever our ethnic or national prejudices are aroused, in times of scarcity, during challenges to national self-esteem or nerve, when we agonize about our diminished cosmic place and purpose, or when fanaticism is bubbling up around us—then, habits of thought familiar from ages past reach for the controls. The candle flame gutters. Its little pool of light trembles. Darkness gathers. The demons begin to stir. —“Science and Hope,” The Demon-Haunted World

My deeply held belief is that if a god of anything like the traditional sort exists, our curiosity and intelligence are provided by such a god. We would be unappreciative of those gifts (as well as unable to take such a course of action) if we suppressed our passion to explore the universe and ourselves. On the other hand, if such a traditional god does not exist, our curiosity and our intelligence are the essential tools for managing our survival. In either case, the enterprise of knowledge is consistent with both science and religion, and is essential for the welfare of the human species. —“A Sunday Sermon,” Broca’s Brain

We will always be mired in error. The most each generation can hope for is to reduce the error bars a little, and to add to the body of data to which error bars apply. The error bar is a pervasive, visible self-assessment of the reliability of our knowledge. You can often see error bars in public opinion polls… Imagine a society in which every speech in the Congressional Record, every television commercial, every sermon had an accompanying error bar or its equivalent. —“Science and Hope,” The Demon-Haunted World 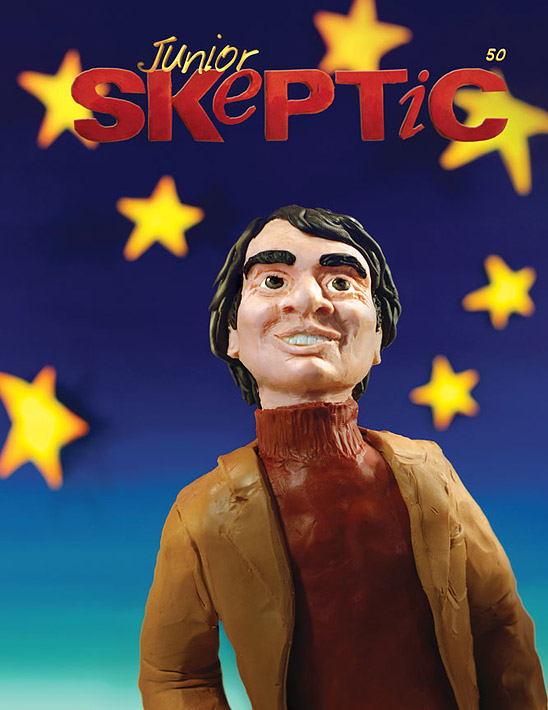 For our 50th issue of Junior Skeptic, we focussed on one of skepticism’s most inspiring people: astronomer Carl Sagan. His many television appearances and bestselling books gave him worldwide fame that has not been equaled by any scientist since. Bill Nye “the Science Guy” remembered him as “a scholar and a visionary. He changed the world. His work still does.” Sagan taught millions of people about the power and beauty of science. His documentary television series Cosmos was seen by half a billion people across the globe. He published over 500 scientific papers, helped plan pioneering NASA space probe missions to other planets in our solar system, solved the riddle of the greenhouse effect on Venus, explored the origins of life on our planet, and sent humanity’s first deliberate messages to the stars. Throughout his life’s work, Sagan spent decades pursuing the truth about paranormal claims—an endeavour at the heart of scientific skepticism. 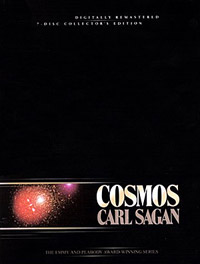 Astronomer Carl Sagan’s landmark 13-part science series takes you on an awe-inspiring cosmic journey to the edge of the Universe and back aboard the spaceship of the imagination. Topics covered include: the 15-billion year history of the Universe; the evolution of life on Earth and what forms life might take on other worlds; Johannes Kepler, the first modern astronomer; the hellish atmosphere of Venus and the threat of the Greenhouse Effect on Earth; the search for life on Mars; the 17th century exploration of the Earth; the Voyager missions to Jupiter and Saturn; the possibility of time travel; Einstein’s theories; the life cycle of stars; determining the origin of the Universe; the brain and the evolution of intelligence; how we might communicate with alien civilizations; the continued survival of the human race versus the threat of nuclear destruction. 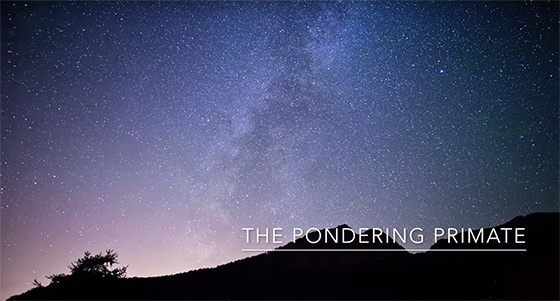 This is a video mashup of Michael Shermer’s interview with Joe Rogan (episode # 846), discussing epistemology using Carl Sagan’s metaphor of a fire-breathing dragon living in the garage.

Your Skeptics Society is a 501(c)(3) nonprofit educational organization whose mission is to promote science and critical thinking. We really heavily on your donations to do the work we do. Please consider giving generously to our cause, and yours. You can make a tax-deductible donation online using your credit card, or make a recurring donation via PayPal, or by downloading a printable donation card to make your donation by cheque in the mail. You may also make a donation by calling 1-626-794-3119. All donations are tax deductible.