Software programmer and technical writer Peter Kassan avers that a return to dualism is not justified. This article appeared in Skeptic magazine 22.4 (2017).

About the image below: An illustration of the Cartesian theater. A tiny person sits in a movie theater inside a human head, watching and hearing everything that is being experienced by the human being. 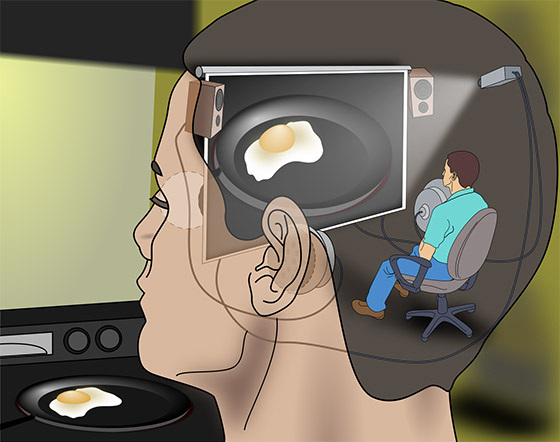 Now Playing at a Cartesian Theater Near You: Dualism Returns

We’re all intuitive dualists. It certainly seems that the world consists of two realms: the ordinary physical world of space and time and stuff; and the literally metaphysical (that is, beyond physical) world of the mind. Although this was undoubtedly everyone’s sense of things since the beginning of time, it’s now primarily associated with René Descartes, who articulated it in the 17th century, so it’s now known as Cartesian dualism. This immaterial realm is home to all metaphysical entities and forces (actually existing or not): the mind, soul, and spirit (whether or not these terms are synonymous); ghosts; God and the angels; Satan, devils, and demons; fairies, elves, and spirits; and fate, luck, destiny, and karma. Animals (according to Descartes) are purely physical beings, lacking both mind and soul, while people have both material bodies and immaterial minds.

Since the Age of Reason, however, secular, monistic materialism has become the dominant stance, in which reality (the world, the universe) consists of only one realm: the physical. (At least for the purposes of doing science. Some scientists who claim a belief in God assert that such belief isn’t incompatible with the principles of science.) Organisms, including human beings, are part of the physical world and biology is, at least in principle, reducible to biochemistry and ultimately to physics. In fact, as the science of psychology developed in the late 19th and early 20th centuries, the mind was banished, at first only methodologically (because introspection proved an unreliable and highly suspect foundation for a science) but in time philosophically as well. Remarkably, the science of psychology (etymologically, the science or study of the psyche—the mind) was redefined as behaviorism— the science of behavior only! Even today, in academia, behavioral science (or the behavioral sciences) is essentially synonymous with psychology.

Science, apparently, requires denying or at least ignoring the mind. Even if excluded as a subject matter, mind is central to a science. It’s impossible to explain science without mentalistic vocabulary: science develops theories to explain interesting (perhaps even puzzling or perplexing) observations. Doing science requires making decisions and judgments, justifying and defending ideas, and examining and evaluating the work of others. (It has been argued that quantum physics reintroduces mind to physical reality because the collapse of quantum uncertainty occurs only when an observer—presumably one with a mind— makes an observation. This seems unlikely. Did the universe, like the forest with the falling tree without anyone to hear, get by for almost fourteen billion years without suffering any quantum collapses because there were no physicists to observe them? And does a quantum system in a state of uncertainty know that the interfering photon is there to take a measurement and not just stopping by because it was in the neighborhood?)

Behaviorism was never an entirely comfortable stance. For all the trouble that philosophers, academic psychologists, and other scientists have with mind, we ordinarily accept its reality. Reports of pain and other sensory dysfunction are central to the diagnosis and treatment of injury, disability, and disease; hallucination, dreaming, and optical illusions are studied scientifically; and pain and pleasure are understood as real. (If not, faking an orgasm would hardly be possible.)

With the science of neurophysiology came a near-universal understanding that the mind is the result of activities in the brain. But mind itself continues to be a mystery—judging by the number of books, articles, journals, websites, societies, and YouTube videos attempting to explain it. Some philosophers (and cognitive scientists, an interesting phrase in this context) simply dismiss consciousness as just (!) an illusion. This is, of course, hijacking the word illusion, leading as it does to some paradoxical notions, such as the illusion of an optical illusion. And even granting that consciousness is an illusion, the illusion is still occurring—how? Where? To what or whom? […]