The Skeptic Research Center is gearing up to release another round of research reports, this time on conspiracy beliefs and peoples’ tendency to conspiricize. In late 2020–early 2021, we released nine reports detailing Americans’ changing attitudes about inequality, institutional trust, censorship, policing and a variety of other topics. If you missed those reports, or simply want to review them in an engaging way, check out the re-release of our general report, “Pandemic Politics: How 2020 Impacted Americans’ Social and Political Attitudes” below. This article is appeared in Skeptic 26.3 (2021).

In mid-2020, the Skeptics Society launched the Skeptic Research Center1 (SRC) —a collaboration between the Skeptics Society and qualified researchers. The SRC was created to better understand what misconceptions most divide our society, and to empower the public with the knowledge necessary to think critically about current events. In the December 2020 issue of Skeptic, we reviewed the reports released from our first collaboration. In this article, we will review the findings from our second collaboration.

The Skeptic Research Center collaborated again with the Worldview Foundations Research Team,2 composed of sociologist Kevin McCaffree, psychologist Anondah Saide, and research assistant Marshall McCready. For this second collaboration, called the Civil Unrest and Presidential Election Study (CUPES), the team examined Americans’ social and political attitudes in light of the substantial social and economic unrest of Summer 2020. CUPES investigated how events such as the presidential election, the George Floyd protests, and the COVID-19 pandemic impacted the attitudes of fourteen hundred Americans regarding a variety of topics.

Our findings were released across nine reports published by the SRC between November 2020 and March 2021. The reports, as well as detailed supplementary statistical information, are freely accessible on the Skeptic Research Center website. The titles of these reports reflect the study’s key topics:

The Skeptic Research Center could use some help with a variety of tasks. If you are interested in volunteering with us, please fill out this form.

Below, we will discuss six central themes we identified across our findings. We’ll refrain from commenting about the potential implications of what we found because we elicited the interpretations of these findings from Skeptic readers such as yourself. These reader responses can be found at the end of this review.

In a study we conducted in 2019, we found greater political disunity among Democrats than Republicans.3 In response to the question, “If you had to choose, which political group do you think is most different to your own political views, currently?” Democrats were statistically as likely to select the Democratic Party as they were to pick the Republican Party. However, in our follow-up study, we found that this in-group bickering amongst Democrats had begun to reverse. Between 2019 and 2020, it seems that the Republican Party became less unified, while Democrats became more unified.4 For example, from 2019 to 2020 there was a 5 percent increase in Republicans choosing their own party as being opposed to their political views, along with a 11 percent drop in Republicans choosing Democrats (see Figure 1 below). In contrast, the percentage of Democrats who reported greater political disagreement with their own party dropped about 10 percentage points during the same period. 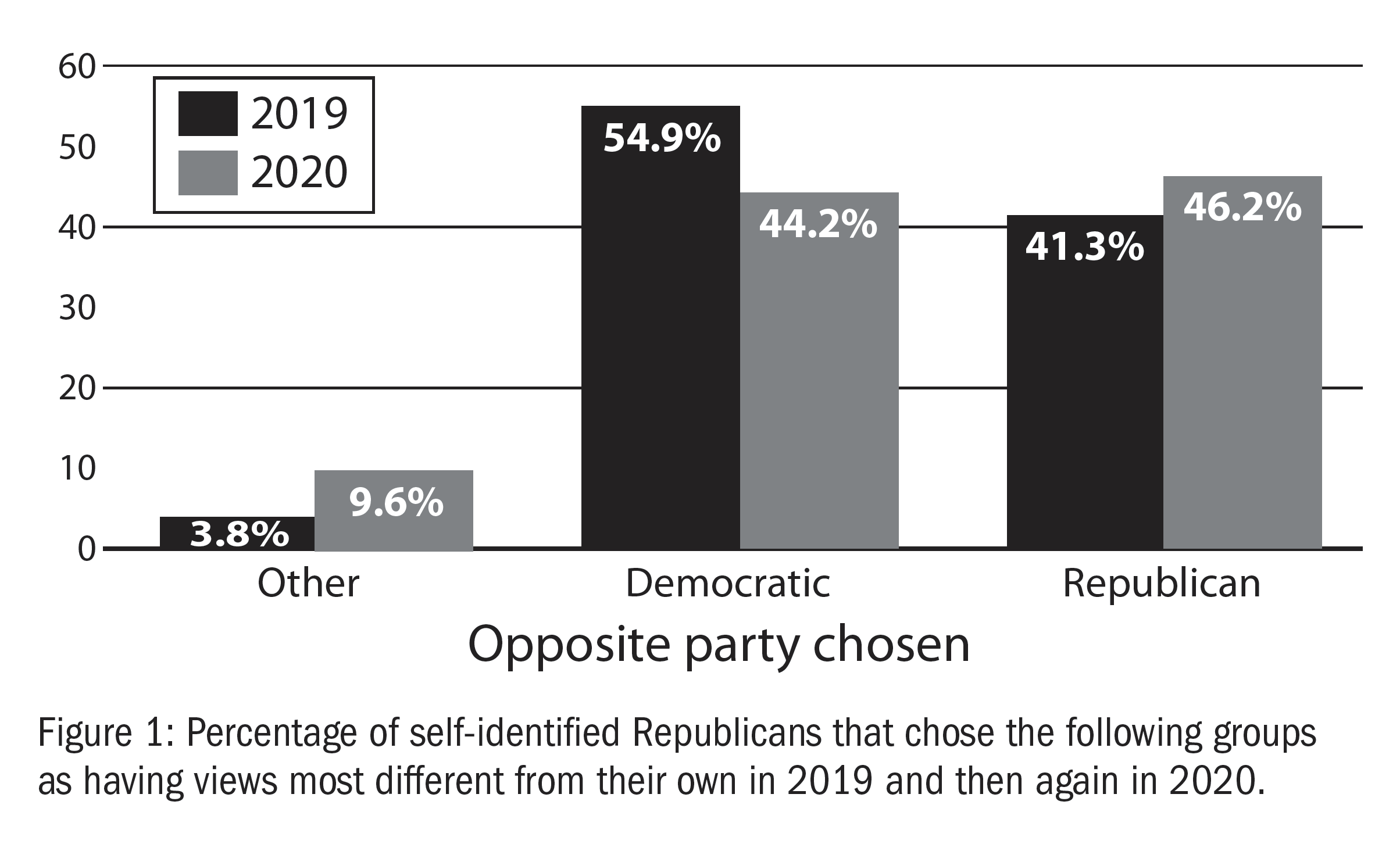 Men and women differed systematically across several dimensions in our 2020 study (CUPES). Gender was related to support for freedom of speech and freedom of thought such that women, regardless of partisan affiliation, expressed significantly lower support than did men.5 We also found gender to be related to changes in socializing during the COVID-19 pandemic. We asked how often respondents spent time with friends and family in 2019 and 2020. Compared to their male counterparts, women of both political parties reported significantly greater reductions in time spent with friends.6

Republican women and Democrats of both genders reported similar reductions in time spent with family. In fact, only Republican men reported no decrease in time spent with family from 2019 to 2020. Finally, we found that women reported significantly lower levels of trust in institutions than men.7 Republican women, in particular, reported the lowest overall trust in the news media, political officials, hospitals and doctors, and educational institutions (see Figure 2). 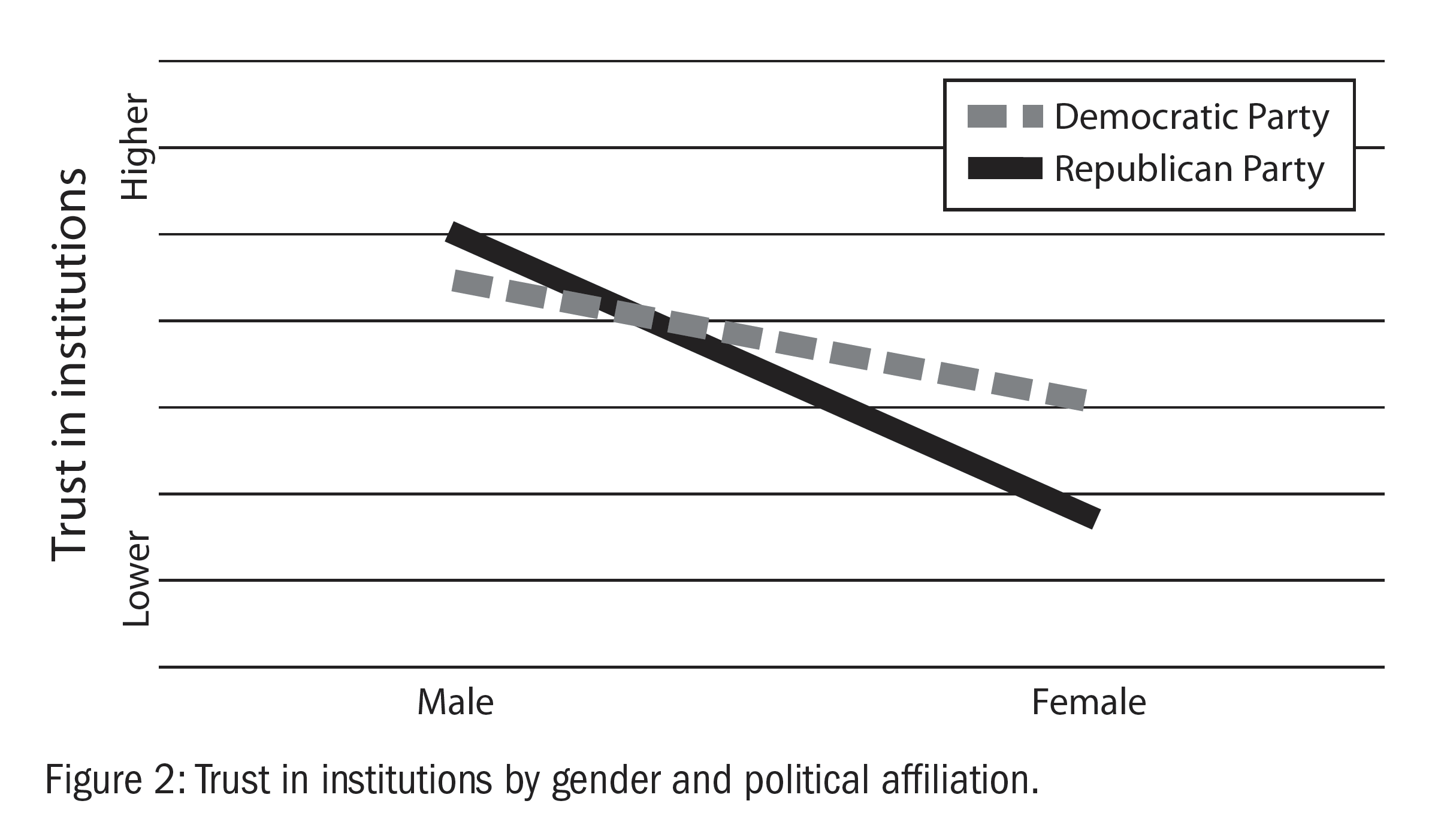 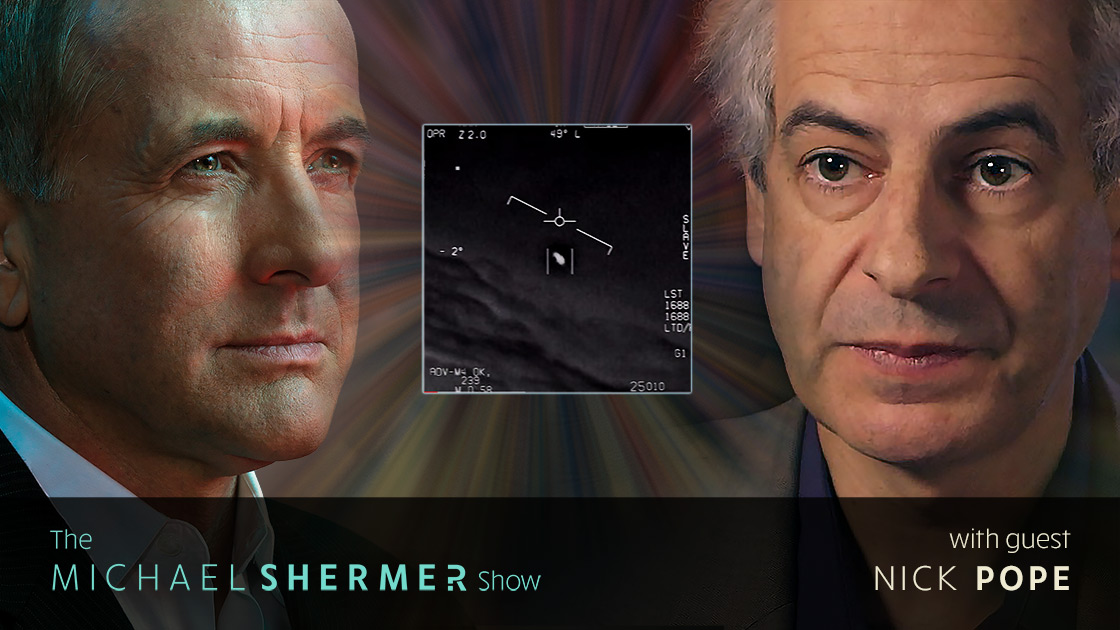 Shermer speaks with author, journalist, and TV personality Nick Pope about: what it was like working for the Ministry of Defense as their UFO expert; The Believer’s Paradox; separating two questions: Are they out there? Have they come here?; SETI science vs. UFO/UAP science; Roswell; Bayesian reasoning about UFOs and UAPs; the quality of evidence in evaluating UFO claims; the US military UAP videos and what they really represent; The Disclosure Project; why we should keep an open mind; the odds of ETIs being out there vs. the odds of ETIs having visited here; an answer to Fermi’s Paradox: Where is everyone?; conspiracies and conspiracy theories, and more…

Nick Pope ran the British government’s UFO program for the Ministry of Defense, leading the media to call him the real Fox Mulder. He’s recognized as one of the world’s leading experts on UFOs, the unexplained, and conspiracy theories. Nick is the media’s go-to person for UFOs. He’s made appearances on numerous TV news shows and documentaries, including Good Morning America, Nightline, Tucker Carlson Tonight and Ancient Aliens. He’s also written for the New York Times, for the BBC News website and for NBC’s technology and science site, and has acted as consultant and spokesperson on numerous alien-themed movies, TV shows, and video games. Nick Pope gives talks and takes part in academic conferences, fan conventions, and debates all around the world. He’s spoken at the National Press Club, the Royal Albert Hall, the Science Museum and the Global Competitiveness Forum, and has debated at the Oxford Union and the Cambridge Union Society. Nick Pope lives in the US.